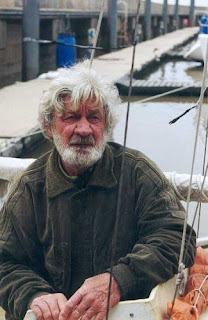 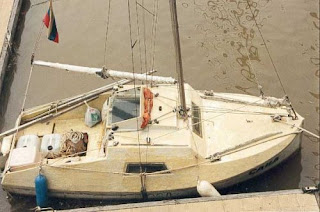 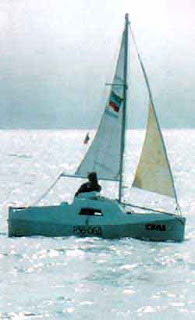 
The Slocum Society does not give Evgeny Gvozdev a mention, and yet he sailed twice around the world, the second time aboard an entirely home-built 3.6m micro-yacht. His first circumnavigation took place between 1992 and 1996 in a 5.5 metre yacht named ‘Lena’, similar to the one used at the outset of his third attempt in 2008. Incredibly his home-built craft named ‘Said’ was built on a window balcony adjoining his meagre accommodation. From there he lowered her on ropes to an open lorry for attaching the 100 kilo keel and transportation to the sea, in readiness for a 370 mile shakedown cruise.

In 1999 he set sail for his second circumnavigation from the Caspian Sea, thence via the Mediterranean, the Atlantic to South America, through the Strait of Magellan in February, 2001, but when he was at Puerto Natales, the Chilean Navy declared ‘Said’ was manifestly unsafe for the voyage. They magnanimously transported the boat on a steamer to Puerto Montt, beyond the notorious Golfo de Penas. From there he sailed to Tahiti in the Pacific, and on to Darwin, where, in 2002, the 70 year old Russian ran foul of the Australian immigration authorities, because his passport had expired. This meant he could not obtain a visa and meanwhile, as his boat was at anchor, a thief stole from it food, clothing, money, his camera and his radio. His only option was to return to South Africa where he held a visa.

Evgeny said the average speed of his vessel was 2 knots, and at the outset of long voyages he always packed so much food, and water into the boat that he hardly had room to get in. He planned to take 90 days to reach Tahiti from Puerto Montt. Since he did not carry a satellite phone, or use a SSB radio, he could not communicate with the outside world. He did not have a satellite tracking device for others to follow his progress, which meant his three children and four grandchildren had to be patient in their search for information as to his whereabouts. His limited means of navigation was the use of two plastic sextants, a compass and charts which he exchanged with other sailors.

At the age of 74, in September, 2008, he started a third circumnavigation, this time aboard a 5.5 m production boat identical to that used for his first voyage. Unknown to him, he was to receive a fatal head injury while sailing in the Mediterranean Sea. He was found dead on a beach at Castelporzio in the South of Italy, not far from his yacht, which was stranded on the beach.

Evgeny was a resourceful, humble character who lived his dreams by overcoming obstacles that would put off most dreamers. He was a man, the likes of whom many would admire, yet few would equal or surpass his great achievements.

It's wonderful to see some credit given to Evgeny gvozdev-I think he was one of the greatest sailors and quite franckly he probably embarasses some sailors whose achievements shrink by comparison.

Dear Bill, do you have any info on Evgeny's first circumnavigation? Most of the articles i find on the internet are from his second trip.. I am curious of his route and in particular if he's visited Australia on his first trip. Please let me know if you have any additional details! Best regards, Natalia Spytek nspytek at gmail dot com

Evgeny came to Puerto Rico in 1993 and spent about 3-4 months there. I was there when he landed in the capital and docked his boat. We became great friends and i learned many of his stories. I fed him, clothed him and help him fix his boat, including a new gas supply tank and we took the boat out at the local marina to fix the rudder and bottom. He parte and he wanted me to sign his sail (one he was saving to bring back to Russia) I was very sad to let him go. He went to Panama to load Lena in a russian cargo ship and cross the canal. He wanted to go to Galapagos and then Australia. I never knew what happened to him until I found multiple posts of him thru the internet. Amazing man like no other, with a heart of gold.

Your input is really appreciated. You had the honour and privilege of being his friend and good Samaritan. Evgeny lived life to the full. Sometimes you have to make opportunities as he did.