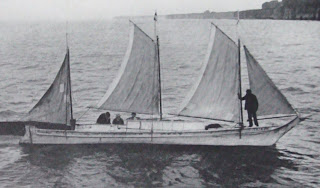 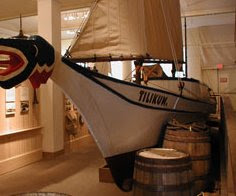 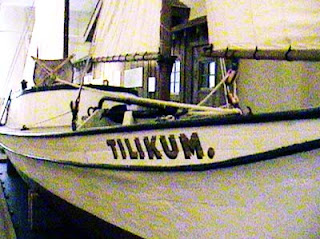 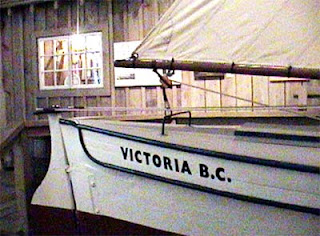 The unique sailing vessel, the ‘Tilikum’, has fascinated me since I was a boy. She can be seen in restored condition at the Maritime Museum in Victoria, British Columbia, Canada. Originally, she was a 38’ Indian dugout canoe, but back in 1901 Captain John C Voss acquired her and converted her into viable ocean-going cruising yacht, with the intention of sailing her around the world to emulate the celebrated circumnavigation of Joshua Slocum aboard his rebuilt ‘Spray’. Voss added 7 inches to the topsides of his canoe, inserted sawn oak frames, added decks, a cockpit and an 8’ by 5’ cabin, before rigging her with three short masts, to carry two gaff sails, a Marconi mizzen, and a self-tacking staysail. This configuration of 230 square feet of sail, on a vessel with only 5’ 6” beam, required half a ton of permanent ballast incorporated into a shallow keel, extending the full length of the vessel, plus 400 lbs of internal trimming ballast in the form of sandbags. Further internal ballast was added by way of her stores, including 50 gallons of drinking water in two separate tanks, so that the combined weight gave her some stiffness when on the wind, preventing her from capsizing. With only a 24” draft, ‘Tilikum’ was not the best boat to windward, but with this profile she lay comfortably in gales to the folding sea drogue designed by her owner.

Voss and his crew, Norman Luxton, set off from Oak Bay Harbour, Victoria, on 20th May, 1901, but Voss never completed his intended circumnavigation. After an epic crossing of the Pacific to Sydney, he sailed to Hobart, in Tasmania, then to Dunedin in New Zealand; from there around the North of Australia, via the Torres Strait, before crossing the Indian Ocean to Durban. After rounding the Cape of Good Hope he sailed to the remote, South Atlantic island of St Helena, before continuing to Pernambuco on the coast of Brazil. After a passage to the Azores, his staunch vessel made it up the English Channel beyond Dover, finally putting into the North Kent port of Margate on 2nd October, 1904. From there she was taken overland to London for display at Earls Court. Later she was left to rot on the mudflats of Canvey Island, Essex, until she was re-commissioned and taken to Victoria as a permanent memorial to the achievements of Voss and his various crewmates, ten of them at different times, accompanied him along the way.

John Claus Voss (c. 1854-1922) wrote a book about his adventures, ‘40,000 Miles in a Canoe’, which became a best seller. Later, in 1913, he also wrote, ‘The Venturesome Voyages of Captain Voss’ that included his previous story, plus an account of sailing a smaller vessel, ‘The Sea Queen’, in Japanese waters when caught in a typhoon. In 1971, nine years after her father’s death, Norman Luxton’s daughter, Eleanor, edited his journal based on his original diary and had it published under the title, ‘Luxton’s Pacific Crossing’. Both accounts differ in several places.

‘Tilikum’, the Boat
http://en.wikipedia.org/wiki/Tilikum_(boat)
Posted by William Serjeant at 9:29 pm