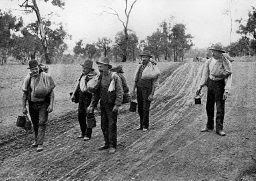 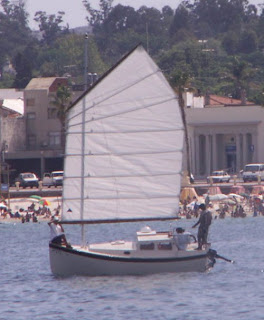 
John Welsford has named one of his boat designs, ‘Swaggie’, after the Australian itinerant workers who travelled by foot from farm to farm seeking temporary employment during the depressions of the 1890s and the 1930s. These ‘Swagmen’ or ‘Tussocker’s travelled lightly, with minimal possessions, including a ‘swag’ (waterproof bedroll) wrapped in a bag. Characteristically, and of necessity they constantly roamed the countryside, only staying at any one place until no longer required by an employer. Fairly Spartan and rugged, this little ship reminds me of the qualities of these roaming ‘Swaggies’. She’s an 18 foot 2 inch, by 7 foot 10 inch junk-rigged, ocean cruising yacht, drawing 2 foot 8 inches with a long keel.

John put in great deal of thought and effort into the design to satisfy the needs of a client who wanted a small craft for sailing along the Southern Coast of Australia. This coastline has few ports of refuge, and it is a place where gale force winds can make it necessary for the sailor to steer a course well away from land to ride out storms. Hence, ‘Swaggie’ was designed to cope with such conditions. John’s client wanted a simple-to-build boat that would not overstretch his budget, and she was to be capable of being managed from inside to minimize exposure and maximize safety. The accommodation was to be as spacious as possible. It was therefore decided to eliminate a cockpit and rig the yacht with a single junk sail. Her heavy displacement of 2,650 lbs could be increased to 3,800 lbs for coastal cruising, and up to 4,180 lbs for ocean voyaging.

I am attracted to several of John’s designs because of their suitability for purpose, and if I had the resources to build a ‘Swaggie’ I would set about building one right away. I know of one fortunate person who has built an excellent example in Uruguay. His name is Luis Nin Estévez, and he has this web site: http://www.swaggie-uruguay.com.uy/eng/proyecto.html .

Hey Bill,
Good call on the Swaggie. She grabs my eye and heart too! I am in the throws of converting my Hunter 19 for blue water sailing just now, but each time I cast an eye over her I can't get over the fact that the cockpit consumes half he overall length. What a waste for the singlehander.

Yeh, having just a tiny cockpit right aft sounds good, not taking up space or holding half the ocean in rough going.

Hi Bill, nice to see another Swaggie coming along, got the planking almost done on ours, will be making the trip from the Canadian prairies to Newfoundland next summer. The further along I get the more you appreciate the robust design, changed the deck plan a little on mine, flush cambered with a small footwell, not sure if John would approve, but looks pretty sleek. Good luck.