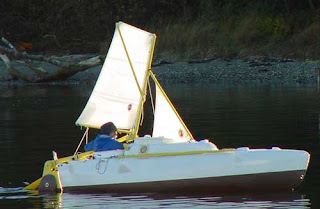 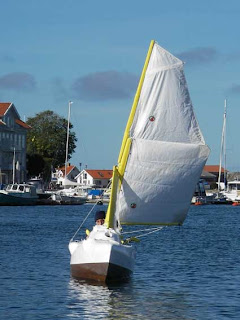 The Viking of the Seas, Swedish Sven Yrvind, is well-known by those who are interested in small, ocean-going sailing vessels, for he is truly a pioneer who has researched and practised long-distance ocean cruising in small boats. He is happy in his workshop building boats to his own designs, but he is happier when out on the ocean, miles from civilization. He is at one with the sea, and confident that he will survive any storm. He rightly believes that small boats are proportionately stronger than larger ones; hence they are more seaworthy. He will not put to sea unless he is entirely happy with the integrity of his boat, and to this end he has devised a system of minimizing impact damage, knowing full well that there are items like large containers floating just under the surface that could cause serious damage in the event of a collision. He has proven that an internal hard-shell, encased in a softer outer one, will likely maintain its integrity, because the softer outer shell will absorb impacts, lessening the chance of serious damage. As a result he builds his boats in this way. Small vessels ‘bounce’ off hard objects, whereas large ones continue their momentum, thereby increasing impact damage. Providing a small yacht is watertight, she will float like a cork or a light bulb, so that she does not resist the waves; therefore she cannot be damaged by them, unlike ‘BT’, the IMOCA Open 60 yacht, in the recent Transat Jaques Vabre Race, when she sustained severe damage to her cabin top, most probably from a breaking wave, or possibly from a floating object. As a result, the yacht became waterlogged and unmanageable; therefore her crew had to be rescued by helicopter.


Sven recently built a 4.1m experimental ocean cruising sailboat, by the name of ‘Yrvindaren 4.1’. She had a beam of 0.96m and a draft of 0.26m, or 0.65m with the board down. This is very similar to the dimensions of Matt Layden’s’ Paradox’, except Sven’s micro-yacht had less beam, and she was round-bilged. He intended to sail her from Sweden to Cape Horn; then after rounding the Cape, continue to Japan before crossing the North Pacific to the western side of the USA, from where he would transport his boat overland to the East Coast for an Atlantic crossing to Norway. Experiments during a Swedish winter in home waters convinced him that his boat was too small. He simply did not have room to move about in her when he was dressed in sufficient clothing to withstand freezing temperatures. Stoically, he accepted he had learned many useful techniques while building the boat, and went on to start the construction of a larger one incorporating chine runners, as per Matt Layden’s ‘Paradox’. Prior to starting the new boat, he spent a long time with Matt, exchanging ideas on small boats, and he sailed his ‘Paradox’ for days at a time, which convinced him that chine runners do enable a boat to make to windward. A feature that Sven incorporates into his boats is a forward drop plate for use during gales. By setting a flat storm sail near the stern of his boat, and dropping the forward plate, he has discovered she will almost face head to wind, while making slow progress to windward. This is far more efficient than using a traditional sea anchor, particularly when near a lee shore!