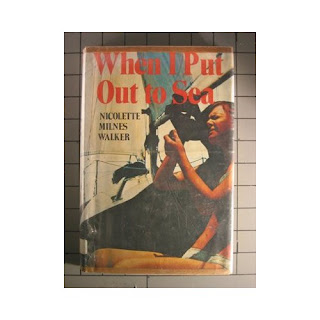 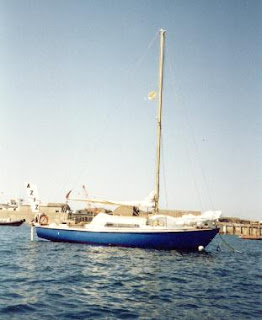 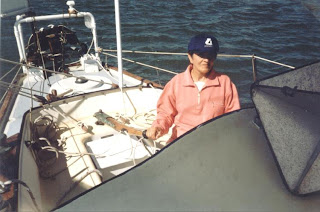 My wife at the helm 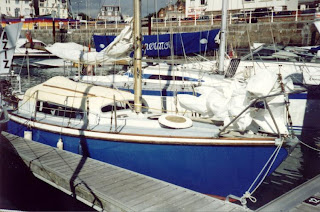 
The largest yacht I’ve owned was a Pioneer 9, designed by E.G. Van de Stadt in 1959. Her name was ‘Aziz’, which is an Arabic word meaning, ‘magnificent’ or ‘beautiful’. She was, indeed, pleasing to my eye. Her overall length was 30’, and her waterline length was 24’. She had a draft of 4’ 8” and a medium fin keel, placed almost amidships. Her balanced spade rudder was under the stern, but forward of the transom. It was a joy to hold the curved, laminated tiller which was always light to the touch. The balance of boat was impeccable, with just a touch of weather helm, irrespective of the sea state. She was a delight to sail, often pointing higher on the wind than many a modern racer. For single-handing and long-distance cruising she had been fitted with a Hasler Gibb, servo pendulum self-steering gear.


I owned ‘Aziz’ between December, 1995 and November 1997, and sailed her from the River Crouch to La Coruna and back. Somehow, it seemed a special privilege to own her, because of her history and ‘fame’. In 1971 Nicolette Milnes-Walker bought her with the purpose of sailing across the Atlantic from Milford Haven, Southwest Wales, to Newport, Rhode Island, to become the first woman to do it alone without stopping. Anne Davison had already crossed the Atlantic single-handed in 1953 to become the first woman to do it, but along the way she put into Brittany, Portugal and the Canary Islands. Nicolette set sail on 12th June, 1971 and after 45 days, in which she experienced gales, loneliness, doubt, fear and elation, she arrived in Newport.


Nicolette’s interest in sailing began in 1966 at Salcombe, and afterwards she was inspired to build a sailing dinghy which she mostly used at Weston-super-Mare. To gain seagoing experience she sailed as a crew member aboard a 25 foot yacht to Spain and the Azores and back. Months afterwards, while at the London Boat Show in January, 1971, she felt an overwhelming desire to sail across the Atlantic, and within 6 months she had found her boat, carried out modifications, provisioned the vessel, and was ready to sail. A psychologist by training, she was interested in studying how people perform various physical and mental tasks when they are subjected to difficult physical conditions. What better situation could there be than to test herself by sailing 4,000 miles alone, while experiencing arduous conditions?


To that end, she kept detailed notes which were useful when she wrote an account of her experiences in a book, ‘When I Put Out to Sea’. She saw many interesting sights, such as a pod of whales at close quarters, porpoises, pilot fish, sharks, flying fish, and an unusual moon halo. She discovered a lot about herself, such as her response to the fear of death, the effects of tiredness, how she coped during a short time of depression, dealing with mild shock, and an acknowledgement of her belief in the existence of a God who ‘observes’ but does not intervene.

Bill, we spoke to you aboard Aziz in La Corunna 1997, would be about late July or early August, as I recall you were just about to or had just attempted to sail to the Azores. We were bound for the Caribbean in another Van de Stadt design a Legend 34 - see my post below you may remember us.

We have seen Aziz a couple of times since, most recently ashore in Hamble Point Marina

I had attempted reaching the Azores, but spent several days becalmed, eventually easing my way out of the Azores High to La Coruna.

You wrote a good Love Story in your Blog, and what a great time you had!

I last saw 'Aziz' in June of last year at Calstock. Nicolette thought she was an old boat at the time of her Atlantic crossing, but she's still going strong. (That's the boat - and I believe Nicolette is too.)

Bill, which Hasler did you fit to Aziz, was it the SP or the larger MP. I ask as I have an SP and have been looking at a Pioneer 9 and wondered if it would fit okay?

When on the Crouch, did you keep Aziz at North Fambridge? I'm pretty sure she was moored close to me when I had my own boat there, an Invicta, at the same time.

Thanks Peter, Yes, I had her there for at least one season,, maybe more. She was a really good yacht, especially on the wind.
Cheers,
Bill.

Unfortunately, she's now in a very sorry state, laid up in a boatyard in Calstock, Cornwall. She's the subject of a post on the Facebook group "Sitting there rotting in a boatyard."

Hi Peter. Thank you for letting me know, but it's sad that this has happened to this boat which is a piece of history. She deserves better than this.

It was always my hope that a consortium would be formed to restore and preserve her, not just as a museum piece, but to use her - maybe lend her to aspiring youngsters who seek adventure.