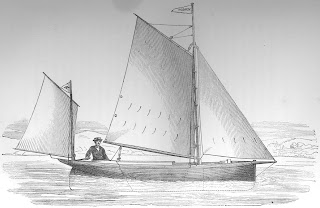 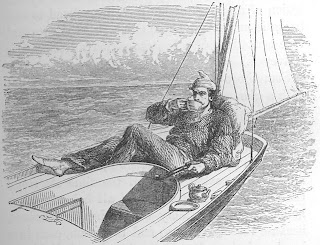 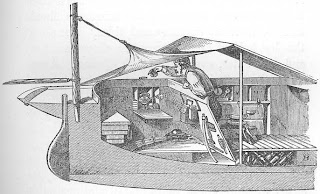 John MacGregor wrote ‘The Voyage Alone in the Yawl Rob Roy’ and had the first edition published in 1867. The book describing a single-handed voyage aboard a 21’ engineless sailing boat from London to Paris and back became an immediate success, and after many editions, I believe the latest to be published as a paperback was on 27th April 2009. A free Gutenberg online version can be downloaded from this URL: http://www.gutenberg.org/etext/27235 . John had already become a popular hero through the publication of books telling of his canoe voyaging on the lakes and rivers of Europe, perhaps the most well-known being, ‘A Thousand Miles in the ‘Rob Roy’ Canoe on the Rivers and Lakes of Europe’.

Here are few excerpts from ‘The Voyage Alone in the Yawl Rob Roy’:
‘I resolved to have a thoroughly good sailing-boat—the largest that could be well managed in rough weather by one strong man, and with every bolt, cleat, sheave, and rope well-considered in relation to the questions: How will this work in a squall?—on a rock?—in the dark?—or in a rushing tide?—a crowded lock; not to say in a storm?
The internal arrangements of my boat having been fully settled with the advantage of the canoe experiences, the yacht itself was designed by Mr. John White, of Cowes—and who could do it better? She was to be first safe, next comfortable, and then fast. If, indeed, you have two men aboard, one to pick up the other when he falls over, then you may put the last of the above three qualities first, but not prudently when there is only one man to do the whole.

The Rob Roy was built by Messrs. Forrestt, of Limehouse, the builders for the Royal National Lifeboat Institution, and so she is a lifeboat to begin with. Knowing how much I might have to depend on oars now and then, my inclination was to limit her length to about 18 ft., but Mr. White said that 21 ft. would “take care of herself in a squall.” Therefore that length was agreed upon, and the decision was never regretted; still I should by no means advise any increase of these dimensions.’

I remember first reading this book when I was a youngster. The red leather bound book with gold leaf embossed into the cover and spine with the superb black and white illustrations taken from etchings, was a joy to handle – even the smell of leather and paper was a delight as I thumbed the crisp white pages. Along with MacGregor’s other beautiful volumes I suppose THIS book most of all kindled my enthusiasm for small boat cruising, and thanks to Rob Roy I have had many great adventures afloat – maybe more to come for as long as the old ticker keeps ticking.
Posted by William Serjeant at 8:50 pm