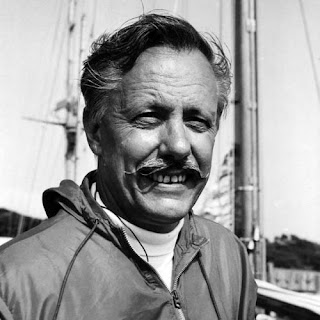 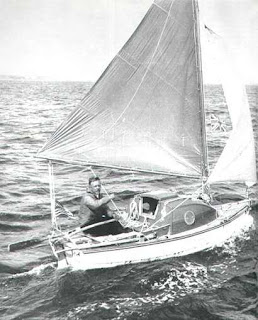 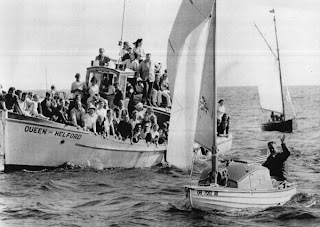 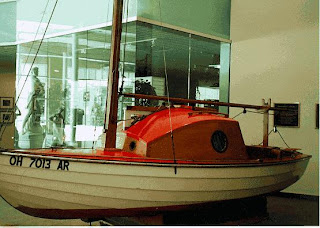 Robert Manry never sought fame, and yet when arriving at Falmouth, England, on August, 17th 1965, having sailed the 13’ 5” ‘Tinkerbelle’ across the North Atlantic from Falmouth, Massachusetts, he had instant fame. It had been his ambition for 30 years to sail his own boat across the Atlantic. Yet I wonder if he realised the pain and anxiety it would bring him, not just the agony of sores brought on by being constantly doused with seawater and living in very cramped conditions, but the anxiety he would experience during gales while riding to his sea anchor and the inevitable mental anguish suffered by his wife and two children as they waited for news. I wonder, too, if he fully realised the dangers he would face during the 78 day voyage. He could not have imagined being swept out of the cockpit by large waves into the Ocean, no less than 6 times!, Nor would he have thought it possible to see 60 ships while en route, a few being close enough to be described as ‘near misses’. Two or three ships with good lookouts drew alongside ‘Tinkerbelle’ with the purpose of offering of assistance and provisions.


Manry had chosen an unlikely, and perhaps an unsuitable vessel for an ocean crossing, but his choice had been determined more by his means and material situation, rather than by what was appropriate. Nevertheless, credit must go to him for his planning and modifications to his boat. Likewise he should be given credit for his resolve and courage. ‘Tinkerbelle’ was nothing more than a dinghy, suitable for day sailing, and 30 years old when first discovered by Manry. He spent months restoring the boat by replacing broken ribs and repairing split planking before adding a diminutive cabin. By making a removable platform to cover the cockpit, and by adding a tent, he made room for his family to sleep aboard when doing short cruises, which was his original aim. His subsequent adaptation of the vessel for an ocean voyage by making her watertight when the hatch was closed, reducing the size of the cockpit, adding buoyancy to prevent her sinking if swamped, and the provision of a backup rudder and tiller, brought success. Without these expediencies, I feel sure there would have been a tragic ending to the story. Manry believed ‘Tinkerbelle’ would self-right without losing her rig, even after pitchpolling; fortunately she was not put to the test. He maintained that a keel boat would not fare so well as ‘Tinkerbelle’ with her centreboard, because of the increased forces induced by the weight of a ballasted keel.


It appears that Manry steered the boat much of the time during daylight hours, and his self-steering system was not up to much. He states that he should have had a second Dacron Genoa for self-steering downwind. There were times when his boat made excellent progress, and if favourable conditions persisted into the night he would continue at the helm until tiredness forced him to take rest. His biggest gripe was cotton clothing which irritated him, and it did not keep him warm when it was saturated with water - wool, on the other hand would have kept him warmer and possibly irritated him les or not at all. He suffered greatly from saltwater sores on his buttocks, and his fingers and toes swelled up. To alleviate these painful conditions he applied skin lotion and Vaseline, in addition to taking a course of Achromycin antibiotics tablets.


When it was all finished, Manry wrote: ‘Did I have the right to endanger my life, even slightly, and consequently jeopardize the future of my family? With much soul-searching I answered these questions in the affirmative, although I am willing to concede I may have been wrong in doing so.’

hi, and thanks bill.
i only recently read this book, despite a long interest in small boat voyaging. i read only today in "a speck on the ocean" that manry's supportive wife died in car accident just two years after the crossing abd robert himself died suddenly in 1971 . he maintained that sailing tinkerbelle across the atlantic was his greatest achievement.
best, terry