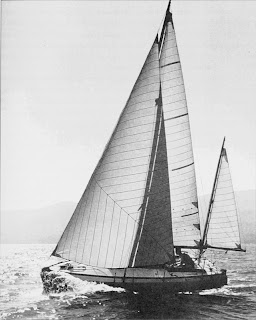 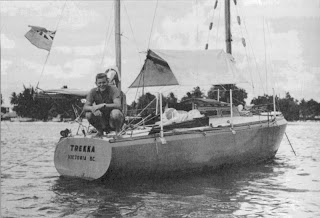 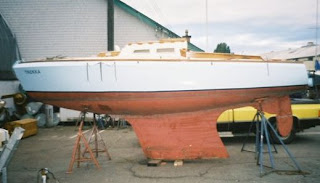 A beloved boat of adventuresome circumnavigators is ‘Trekka’, the 21’ yacht built and sailed around the world by the young John Guzzwell. His book, ‘Trekka Round the World’ was the catalyst that set afire the hearts of many a dreamer.


At the age of 25, on September, 10th, 1955, he put to sea from Victoria, British Columbia, and set sail for Hawaii. From there he proceeded to New Zealand, where he laid up his boat for 16 months while cruising with Miles and Beryl Smeeton aboard ‘Tzu Hang’, their 46’ double-ender. On that fateful voyage in the South Pacific, when they were about 1000 miles from the Strait of Magellan, ‘Tzu Hang’ pitchpolled. Catastrophically, she lost her rig and sustained extensive damage to her superstructure, but a unified and motivated crew made temporary repairs and set up a jury rig that enabled them to sail to Coronel, Chile. Not least in this daunting task of survival, were the woodworking skills of Guzzwell, comradeship, and a combined determination to make it safely to land.


On returning to his boat in 1957 Guzzwell prepared her for crossing the Tasman Sea to Australia, then onwards to South Africa via the Indian Ocean and the Cape of Good Hope. From there he sailed to the Panama Canal, then to Hawaii, from where he continued to Victoria, arriving there on September, 12th, 1959 to complete his circumnavigation. In 1961, newly married, John and his wife, Maureen, had a successful cruise aboard ‘Trekka’ to the Hawaiian Islands. He subsequently sold the boat to Clifford and Marian Cain, who completed a circumnavigation in her between 1964 and 1967. Thereafter, the Cains used ‘Trekka’ for day sailing, and when asked by Joanne Witt, one of Clifford’s navigation students if they would sell her, they agreed. She wanted to sail to England. At the outset of her voyage, the Guzzwells kept company with her in another yacht as far as Honolulu, but for reasons known to Joanne, she decided she could not continue, whereupon she sold ‘Trekka’ to Eric Abranovich. Early in 1980 the Thermopylae Club of Victoria negotiated with Eric for the purchase and delivery of the boat to Victoria. He duly sailed the 3,500 miles, and on his arrival he received a tumultuous reception from thousands of spectators, including John Guzzwell.


In 1959 ‘Trekka’ became the smallest yacht to sail around the world, and John Guzzwell became the youngest person to complete a single-handed circumnavigation. Sadly, the latest information I have, about ‘Trekka’, is that she has had her keel removed and is on display as window dressing at the Maritime Museum of British Columbia.* I hope that the Museum authorities will see fit to look after her, not as a window display, but by maintaining her in working condition afloat, so that she can be used on special occasions, such as museum promotions, tall ship gatherings, maritime conventions, and classic boat festivals etc.