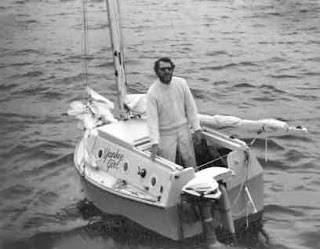 
The original concept of the ‘Around-in-Ten’ Race was, as the title suggests, a race around the World for competitors in 10 foot sailing boats. The first leg was to be a shake-down ‘cruise’ from the Bahamas to Panama. A mother ship was to act as a resources vessel at the start and finish of each leg; she was to sail ahead of the ‘fleet’, and for as long as she was in the proximity of the racers, she would act as a safety vessel. There was a surprising amount of interest in this supreme challenge and several candidates declared themselves possible starters, but one by one, they all withdrew their candidacy.

There were critics who said it could not be done. They had looked at the logistics and maintained that such small boats could not carry sufficient stores for the long ocean crossings, but they must have been unaware of the voyages of Gerry Spiess in ‘Yankee Girl’. Gerry’s 10 foot sailing boat had crossed the Atlantic and the Pacific to prove them wrong. When the idea of a round-the-world race in 10 foot boats was being mooted, I believed it would be possible, and nothing has changed my mind. The challenge remains open via the ‘Around-in-Ten’ web site, sponsored and run by Steve Carey. In fact, the concept has been expanded to individual or group challenges, according to circumstances; for example, if a person wants to test himself and his boat by sailing her around the Gulf of Mexico, he can declare his personal challenge, or if someone invites others to take on an Atlantic race in 10 foot sailboats he can use Steve’s web site to promote his challenge.

Around in Ten web site
http://www.aroundinten.com/

Alone against the Atlantic
http://www.marlinbree.com/alone_against_the_atlantic_33621.htm

Alone Against the Atlantic – Book from Amazon.com
http://www.amazon.com/Alone-Against-Atlantic-Marlin-Bree/dp/0898935067

Ten Feet across the Pacific
http://www.sailingbreezes.com/Sailing_Breezes_Current/Articles/Nov05/yankeegirl1.htm

Ten Feet across the Pacific
http://www.marlinbree.com/broken_seas_38771.htm
Posted by William Serjeant at 3:20 pm