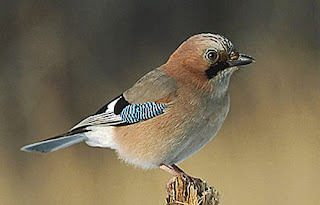 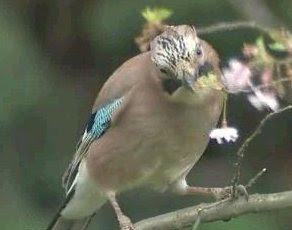 Fairly regularly Jays visit my back garden, and this morning I had the pleasure of examining one at close quarters. I love watching birds, but especially jays, because they are more colourful than most aves that frequent my neighbourhood. They are generally private, shy birds that keep themselves hidden behind foliage. They particularly like oak trees from which they collect acorns in autumn to store as a source of food for the winter months by burying them. Both the magpie and the jay are members of the crow family, and having similar habits they usually do not get on with one another. Perhaps that’s why I’ve never seen a jay and a magpie together. Magpies will instinctively attack jays. The former have a bluish-green sheen on their wings and tail, but Jays have more distinctive black and white wings with a chequerboard patch of blue, black and white.

The jay I saw this morning was about 11 inches long; therefore it may not have been an adult bird, because mature Jays can grow up to 13 inches. I couldn’t tell if it was male or female, because males and females look alike. This one was mainly pinkish brown, and its head had a black and white flecked crown. Either side of its dark grey beak there were black, turned down streaks resembling a Mexican moustache. Jays love eating acorns, nuts, seeds and insects, but given the chance, they will also take nestlings to supplement their diet. Being intelligent opportunists, they will eat small rodents, beech mast, fruits, insects, and feed at bird tables, where they will stuff peanuts into their crops to stash away, and they will gladly eat kitchen scraps if they are available. To a large extent, their adaptability is the secret of their survival in these times of declining bird populations.
Posted by William Serjeant at 5:44 pm