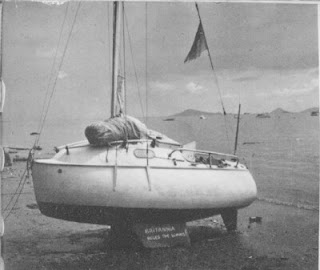 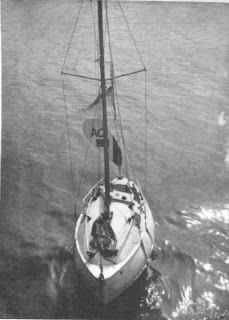 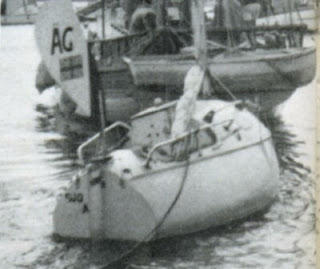 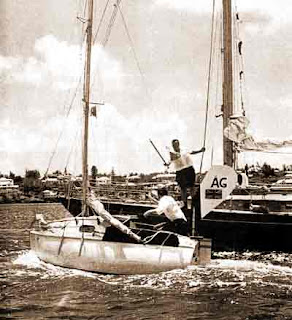 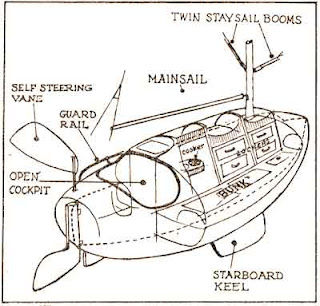 In 1968, John Riding’s book, ‘The Voyage of the Sea Egg’ was published by Pelham Books, UK. It gave an account of his adventuresome single-handed voyage aboard a 12’ micro-yacht across the Atlantic from France to New York. Later, Riding wrote a sequel, ‘Sea Egg Again: From Atlantic to Pacific’, describing his follow-on cruise southwards along the American coastline to the Panama Canal and into the Pacific, before heading northwards to Mexico. Departing from San Diego, he made the extraordinary crossing of the Pacific to New Zealand, effectively sailing halfway around the World.


Very little is known about what happened to the intrepid long-distance sailor and his tiny yacht after sailing from Kawau Island, on the NE coast of New Zealand’s North Island, in 1973. He expected the crossing of the Tasman Sea would take about 66 days, but he never arrived at Sydney, Australia, and in due time, he was declared, ‘lost at sea’. No trace of the vessel has ever been found. Possibly the last person to have had a conversation with the 33 year old British sailor was Michael Brien, who owned the yacht, ‘Swirly World’, which he used to tow ‘Sea Egg’ from Auckland to Kawua.


The seaworthiness of ‘Sea Egg’ was well proven and the competence of her crew was beyond question. So what did happen? Possible scenarios are: Total loss by fire; run down by ship; starvation and dehydration of crew due to being at sea too long through contrary currents and lack of wind, with the consequential loss of the vessel on reefs; dismasting, with similar consequences; vessel sunk by predator; loss of rudder or one of the keels, disabling the yacht; deliberate scuttling of the vessel and possible suicide though imbalance of mind, though this is unlikely because of Riding’s past achievements.
Posted by William Serjeant at 8:48 pm

Nice find Bill! .. this should definitely be posted to AiT!

Paul, I'll make a link to your recent post at AiT.
Bill.

This entry really takes me back. I was turning 16 in Bermuda in the summer of 1965 when John Riding tied up at the Hamilton Princess to shower and re-provision on his first transatlantic passage. Seeing him and the Sea Egg definitely hooked me on small craft. Thanks!

Takes me back too... Around forty years in fact... I was delivery skipper on a 72Ft ketch on passage from the Virgin Islands to Newport Beach...
Calling at Cabo St.Lucas for fuel on the heels of a hurricane, my dock lines were taken by a disheveled John Riding looking for a ride to California where his little "Sea Egg" was awaiting the planned Pacific crossing...We became friends on the trip North and he explained his taking on a delivery job from Costa Rica to California to make enough cash for the next leg of his "Sea Egg Saga"...
An unexpected hurricane wrought havoc on the fleet of yachts anchored off the beach at Cabo...Many, including Johns' were tossed up on the beach and demolished...
John also regaled me with details of his harrowing passage from Panama up to "almost" San Diego, to be set South by the current when actually in sight of San Diego and being forced by total lack of water and food, to sail the Egg onto a Mexican beach filled with US surfers who simply picked up the Egg bodily and carried it up to dry land, John and all!... The Egg finished her voyage to San Diego aboard a trailer...

we met john in Hawaii. he was so kind and nice to us. our 2 cat had made the voyage during hurricanes and he was nice to share his home made orange chicken with us. would love to read the books. what happened to his wife? he was so proud of her.

I well remember seeing John on board Sea Egg tied up to the wharf downtown Auckland i could not believe that he had sailed this midget yacht all the way from England and was going to attempt the mighty Tasman.He had made front page of the NZ Herald newspaper at the time ---Mark Alloway Whitianga

I was good friends with John and Marianne in Acapulco. Recall he took over temporary captain's job on schooner Puritan before their smaller sailboat delivery to Santa Barbara thwarted by 3am hurricane destruction in Cabo. I'd taken a last photo of the delivery vessel that was on front page of Santa Barbara News Press and well recall Marianne's description swimming ashore in the havoc of the storm. They were taking all my winter sailing clothes back to Santa Barbara aboard too at the time as I was headed for charter work in the Caribbean tropics, and we'd kept in touch when they were in San Diego. I don't know tho what Marianne went on to do after losing John in the Tasman Sea, and if anyone knows how I may reach her...please email waterfrontlady@comcast.net. I've always regretted losing touch. That she and some friends were seriously out to circumnavigate much of the world in a Land Rover concurrently with John's similar ambitions with the SEA EGG by sea, and their meeting at the Panama Canal was always a most fascinating story! Once again, if anyone has contact with Marianne, I would be grateful to send her hellos and hugs. Thank you.

Hi
Johns wife, Marianne is my mom. She remarried, moved to South Africa and had two daughters. We loved to hear her stories of John and his adventures. She even started writing a book, sadly never got finished. Sadly she passed away last year.

@ waterfrontlady I remember that story... was her favorite 😊

I saw SEA EGG from my verandah at Austinmer about 1 mile off Thirroul beach travelling north toward Sydney on the day he was due there. Through strong binoculars it was obvious it was Sea Egg with its red sails. the coast runs nth east to Sydney along the rocky shore of the Royal National Park Which he would have hit if he failed to change course. When it was reported that he was overdue and there was a search I phoned the police and reported what I had seen then heard no more it appears my report was ignored. It is my opinion that John changed course north when he encountered the coast south of his destination and while sailing under wind vane steering he maybe fell asleep and crashed into the rocky shoreline and sank. I intend telling this true story in 3 yrs on the 50th anniversary of his disapearance. No trace of Sea Egg was ever found I know it is on the bottom along the coast just south of Sydney. Please complete the history with these facts'