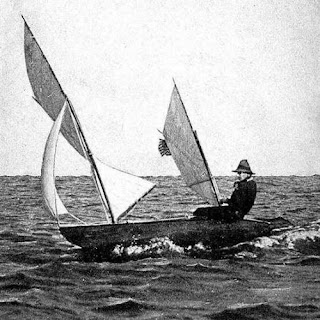 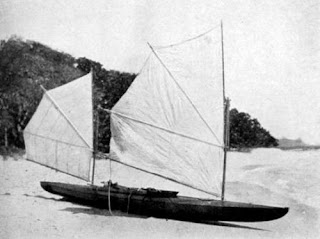 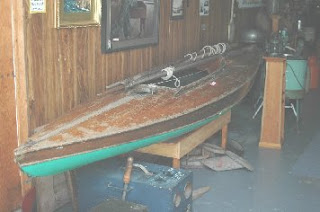 
Yacht designer, sailor and author, Frederic A. Fenger was born in 1882 and he lived to the ripe old age of 88 years. In 1911 he used his rudderless canoe, ‘Yakaboo’, to explore the Caribbean islands and he wrote a book, ‘Alone in the Caribbean’ describing his experiences. The canoe was a beamier version of one he had designed and cruised for over a thousand of miles. Her length was 17 ft, with a waterline of just over 14 ft, and a beam of 3 ¼ ft. When fully loaded with her crew and gear, she drew no more than 6ins, without the centreplate. Having a jib, two batwing sails and a fore and aft adjustable centreplate, Fenger could steer his boat by playing the mainsheet.

Here, I think it is better if I let Fenger describe the characteristics of his unusual vessel:

“So my craft was named before I put her down on paper. She must be large enough to hold me and my outfit and yet light enough so that alone I could drag her up any uninhabited beach where I might land. Most important of all, she must be seaworthy in the real sense of the word, for between the islands I should be at sea with no lee for fifteen hundred miles. I got all this in a length of seventeen feet and a width of thirty-nine inches. From a plan of two dimensions on paper she grew to a form of three dimensions in a little shop in Boothbay and later, as you shall hear, exhibited a fourth dimension as she gyrated in the seas off Kick 'em Jinny. The finished hull weighed less than her skipper -- one hundred and forty-seven pounds.”

“She did not look her length of seventeen feet and with her overhangs would scarcely be taken for a boat meant for serious cruising. Upon close examination, however, she showed a powerful midship section that was deceiving and when the natives lifted her off the horses -- "O Lard! she light!" -- wherein lay the secret of her ability. Her heaviest construction was in the middle third which embodied fully half of her total weight. With her crew and the heavier part of the outfit stowed in this middle third she was surprisingly quick in a seaway. With a breaking sea coming head on, her bow would ride the foamy crest while her stern would drop into the hollow behind, offering little resistance to the rising bow.”

“She had no rudder, the steering being done entirely by the handling of the main sheet. By a novel construction of the centerboard and the well in which the board rolled forward and aft on sets of sheaves, I could place the center of lateral resistance of the canoe's underbody exactly below the center of effort of the sails with the result that on a given course she would sail herself. Small deviations such as those caused by waves throwing her bow to leeward or sudden puffs that tended to make her luff were compensated for by easing off or trimming in the mainsheet. In the absence of the rudder-plane aft, which at times is a considerable drag to a swinging stern, this type of canoe eats her way to windward in every squall, executing a "pilot's luff" without loss of headway, and in puffy weather will actually fetch slightly to windward of her course, having more than overcome her drift.”

“She was no new or untried freak for I had already cruised more than a thousand miles in her predecessor, the only difference being that the newer boat was nine inches greater in beam. On account of the increased beam it was necessary to use oars instead of the customary double paddle. I made her wider in order to have a stiffer boat and thus lessen the bodily fatigue in sailing the long channel runs.”

“She was divided into three compartments of nearly equal length -- the forward hold, the cockpit, and the afterhold. The two end compartments were accessible through watertight hatches within easy reach of the cockpit. The volume of the cockpit was diminished by one half by means of a watertight floor raised above the waterline -- like the main deck of a ship. This floor was fitted with circular metal hatches through which I could stow the heavier parts of my outfit in the hold underneath. The cockpit proper extended for a length of a little over six feet between bulkheads so that when occasion demanded I could sleep in the canoe.”

E-Book: Alone in the Caribbean
http://ambergriscaye.com/pages/mayan/alone_01_2.html
Posted by William Serjeant at 3:00 pm