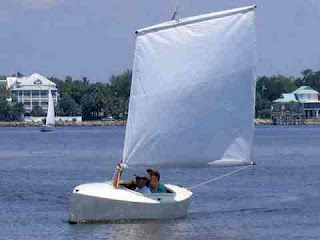 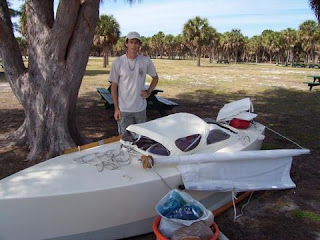 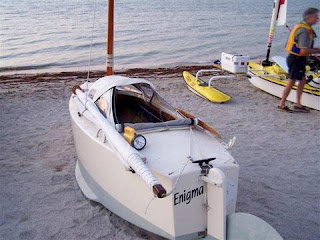 Matt Layden, the designer and builder of the original ‘Enigma’, is a well-known American sailor who has participated in several Everglades Challenge races, organised under the banner of ‘WaterTribe’. Matt is a genius when it comes to the design of small boats, particularly sailing boats. He very successfully raced his Paradox sailboat in 1993 to win the WaterTribe Challenge Race. ‘Enigma’ is a lighter, shorter, and less beamy version of Paradox. Unlike Paradox, which has lead and water ballast, ‘Enigma’ relies on her crew, plus removable sandbags or cruising gear to bring her to her waterline. Both sharpies have common characteristics, i.e., hulls with substantial rocker, low aspect roller furling lugsails, chine runners and lifting rudders.


I built my Paradox over a period of 18 months in my spare time, but it took considerable effort because of the great number of individual components that had to be made and assembled, such as those required for the waterproof ventilation system in which the mast was housed. Sheathing the hull, deck and cabin with layers of epoxy-saturated woven roving was very time-consuming. By contrast, ‘Enigma’ is a smaller, simpler boat to build, because her hull is formed by the stitch and tape method. According to how ‘Enigma’ will be used by her owner, I believe it would only be necessary to sheath her underwater parts – certainly for the sort of sailing I would do with her - that is weekend sailing on the East Coast of England. For the solo sailor, she would make a superb trailer boat, capable of coastal cruising in fine weather. She would also be suitable for lake sailing and exploring rivers while being powered by her yuloh. Her shallow draught would enable her skipper to venture in those upper reaches where other craft seldom go.


Matt’s ‘Enigma’ now belongs to Dave and Mindy Bolduc who cruise together in her with two parrots! How they manage this, beats me, but I suppose the internal usable space is not much less than the space in a Paradox. She’s a well-proven boat, because Matt raced her in the 2006 WaterTribe Ultimate Challenge Race, over a distance of 1,200 miles around Florida, finishing first in his class, and third overall. Interest in the little boat, as result of Matt’s success, brought a flurry of requests for him to make plans available for would-be builders, but I believe there was a certain reluctance on his part to comply with their requests, not just because of other demands or priorities in his life, but because of a regard for his responsibility as a designer. Unlike Paradox, which is a heavy displacement boat that will look after a solo sailor in difficult sea conditions, a lightweight ‘Enigma’ is more comparable to a narrow dinghy – you might say she is a boat similar to a decked sailing canoe that needs skilful handling in tricky seas. Consequently, Matt has consented to work with George Van Sickle on perfecting plans for the ‘Enigma 460’, which is a longer boat than Paradox, but only 6 inches wider than the original ‘Enigma’, now known as the ‘Enigma 360’. The new boat is a sort-of, in between version with a hardtop, unlike the smaller ‘Enigma’ which has a folding hood. Providing she is well ballasted, she should be more sedate than the ‘Enigma 360’. I prefer the original design, because she is easy to launch and to portage by using her integral two wheel trolley. Matt was able to pull his ‘Enigma’ on her trolley, complete with cruising gear, 40 miles overland between St. George and the Suwannee River at Fargo during the WaterTribe Ultimate Challenge Race.

Statistics of ‘Enigma’ – the original boat

Any news as to whether the Enigma 360 plans have become available?