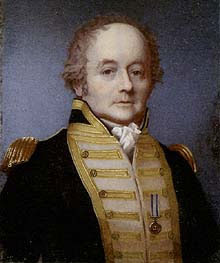 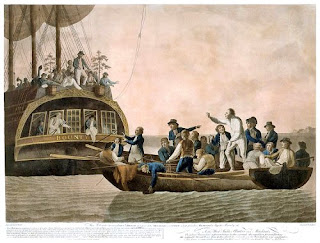 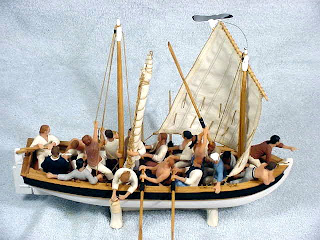 A model of the 'Bounty Launch' 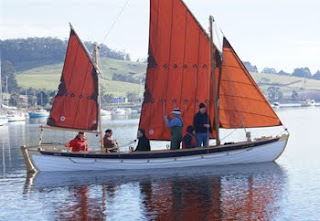 
Captain William Bligh’s remarkable 3,618 mile voyage with 18 crewmen besides himself aboard the 23-foot open launch from HMS 'Bounty’ is well-documented, not least Bligh’s log, being the most authentic source commenced on Tuesday, 28th April, 1789, and ended on Sunday, 14th June, 1789. A great deal of fiction, romance and drama has been added over the years to the most well-known mutiny story, but what can’t be denied is the professionalism of Bligh and the respect held for him by those who survived to tell the tale. Not one soul was lost during the hazardous, stormy voyage in an over-laden vessel with only 7 inches of freeboard. Set adrift in the ship’s launch by the mutinous crew, headed by Fletcher Christian, they had scant provisions for a seven week voyage of survival from Tofua (Tofoa), an island in the Tonga group, to Coupang (Kupang), West Timor. In all, Bligh listed his provisions as 150lb of bread, 16 pieces of pork, each weighing 2lb, 6 quarts of rum, 6 bottles of wine and 28 gallons of water, all of which he strictly rationed for his men, amounting to no more than a starvation diet.


Fortunately at the start, conditions were calm, so that Bligh and his men were able to row, and when the wind sprang up they sailed to the nearby island of Tofua, where after searching for extra water and food, they were attacked by hostile natives. One crew member, John Norton, was stoned to death on the beach from which they made their escape while being pursued by a dozen stone throwing natives in their canoes. Bligh distracted them by dropping clothes into the water which they duly retrieved. Afterwards it was nearly dark and the natives gave up their chase. The voyage from there was one of abject misery, because of storms causing the men to continuously bail the boat as she ran before the wind. With very little in the way of protective clothing, they suffered severely from the cold and because of being wet. They were fearful of landing on any of the Fijian islands, the New Hebrides islands, New Guinea and the North Australian coast on account of finding hostile natives. Fortunately they were able to supplement their provisions by catching noddies, small birds the size of a pigeon, and boobies, much bigger birds, about the size of a gannet.


Bligh eventually made it back to England with 12 of the survivors aboard a variety of vessels. What amazes me is that Don McIntyre, Mike Perham and two others will endeavour to re-enact the voyage in the ‘Talisker Bounty Boat’, a vessel a little longer than the original, but with less than half the volume. Their stated purpose is to raise funds for the Sheffield Institute for Translational Neuroscience (SITraN). April, 28th 2010 will mark the 221st anniversary of the Mutiny on the Bounty. These adventurers intend to embark on that date, under similar conditions to Bligh’s crew, with no charts, and not enough food or water to accomplish the task of following the wake of Bligh’s boat for a distance of just over 3,600miles. They will not take nautical almanacs, modern watches, or torches, but they will have a GPS tracking system which will enable the outside world to follow their progress. Via a satellite computer link the crew will be able to send Blogs, photos and audio clips. Wisely they will be taking adequate protective clothing, including Gore-tex jackets and pants and an inflatable liferaft. Navigation equipment will include an 18th century octant and sextant, two 18th century pocket watches, nautical tables, a ship’s compass, telescope, rope knot meter, lead line, ink, pens, notebooks, a logbook and a magnifying glass.