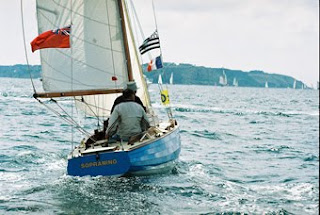 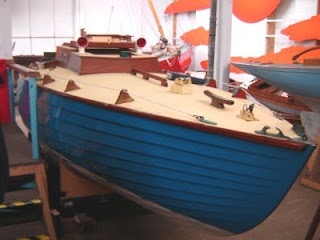 John Laurent Giles (1901-1969) was a yacht designer with a flair verging on genius, being able to think outside the common mould. In advance of his contemporaries, he pioneered the design of ultra light displacement (ULD) racing yachts, and he believed that a small boat could be just as seaworthy, or even more so than a large one. Who would have thought of incorporating a reverse sheer into the hull of yacht in the late 1940s? Yet the reverse sheer provides more usable interior space and the resulting raised decks shed water easily; additionally, the higher topsides keep it off in the first place, and if the yacht were to invert, floatation from the raised deck would help flip the boat the right way up.


Well, when Patrick Ellam, an enthusiastic sailor of decked cruising canoes, asked Giles to design him a miniature yacht for fast, long distance cruising. He agreed and passed the brief to one his employees, Colin Mudie. Colin drew up the plans which incorporated the features Ellam wanted, i.e., light displacement and reverse sheer. Thus, the revolutionary 19’ 6” yacht ‘Sopranino’ was conceived, and she was later born in 1950 at the ship builder’s yard of Wootens of Cookham Dene.

Patrick’s ambition was to sail her across the Atlantic, and Colin Mudie jumped at the opportunity of joining him. They set out on 6th September, 1951, and during a sixteen month cruise they visited La Coruna, Las Palmas and the Caribbean, finally arriving at New York, having cruised a distance of 10,000 miles. Shortly afterwards, they wrote a book, appropriately named, ‘Sopranino’, in which they gave a well written account of their numerous adventures. They had proven their belief that an inexpensive, small, well-found yacht could safely cross an ocean in the hands of a competent crew.


1) On December, 7th 1950 at the inaugural meeting of the Junior Offshore Group (JOG), Patrick Ellam was elected to be the Captain and Secretary. Today, JOG is an organization that arranges races for IRC rated yachts that are based in the Solent.


2) Plans for a midget yacht similar to ‘Sopranino’ can still be purchased from Laurent Giles, under the name of ‘Barchetta’. She is slightly beamier than ‘Sopranino’, but apart from that she differs very little.


3) ‘ Sopranino’ was shipped from the USA in a poor state, but she has been lovingly restored, and she can be seen at Cowes Maritime Museum.

Dear Bill, just found your blog.
What a gasser is Sopranino. Here in Melbourne Australia we have a Sopranino/Barchetta, a sloop rigged Trekka and I have been building a 'cousin' to them both called Infanta, I am calling her "Te Kua" Kiribati for porpoise or dolphin. She is almost the same as Soppers but 20' LOA with a fixed fin keel = 2'6" draft with a centre plate giving 5'6" draft. Not finished yet but almost!?
Mike McKeon.