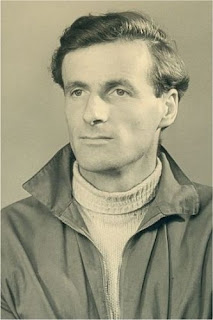 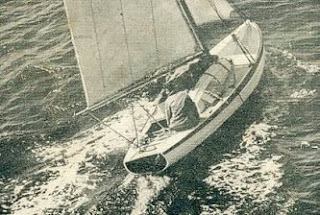 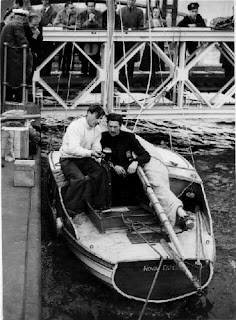 
When I was 15, I had the privilege of being the regular crew aboard a miniature converted St Ives lugger. She had been converted to a gaff cutter with a low profile cabin, and she was kept on a mooring at Dartmouth, Devon, England. One particular weekend in 1949, hoards of people gathered by the quayside where there was a tiny clinker sloop. Strapped over her cockpit was an inverted pram dinghy acting as a cabin for her crew. I learned that Stanley and Colin Smith had recently arrived there in this 20’ boat from Dartmouth, Nova Scotia. To me, she looked like a day sailer, but I realized her sea-keeping qualities must have been up to the job, as she had sailed thousands of miles from a land far beyond the horizon. She certainly had attractive, easy going lines, incorporating a buoyant bow and a wineglass shaped transom, the base of which was just clear of the water. The simplicity of her gunter-lug rig was evident, there being no backstay, only two shrouds either side of the mast and a double forestay. I have since learned that her waterline length was 16 feet, and her beam was 6 feet 3 inches. She drew 2 feet 10 inches when fully loaded with equipment, food and water for her North Atlantic crossing. That left just sufficient space for the two brothers to lie side by side, i.e., 6 feet by 4 feet. She had 3 feet 6 inches headroom. While on passage, generally one brother would be below, while the other would be at the helm. In their book, ‘Smiths at Sea’, published in 1951, they explained that through lack of funds they could not afford a sea-anchor, a chronometer, a log, oil-bags, or even oilskins! The only thing going for them was ‘hope’ for the future – hence they called their vessel, ‘Nova Espero’, meaning ‘new hope’.

On 17th May, 1951, Stanley Smith and Charles Violet departed from the Festival of Britain Site, London, aboard the ‘Nova Espero’ bound for New York. They were given a letter from the Mayor of London for the Mayor of New York. Damage sustained to the boat during a storm caused them top stop at the Azores to effect repairs. Wisely, before setting out on the voyage, ‘Nova Espero’ had been equipped with a proper cabin and a mizzen sail which would enable her to lie more comfortably to her sea anchor. The North Atlantic adventure to New York took about 18 weeks, via Newfoundland. In 1952 their book, ‘The Wind Calls the Tune’, describing the voyage, was published.

I can’t recollect how the ‘Nova Espero’ arrived back in England, but she may have been shipped on a cargo vessel. In 1962, Rupert Hart-Davis published, ‘Nova Espero’s Third Voyage’, written by Charles Violet, telling of his journey in the little boat through the French canals and of his adventures while exploring the Mediterranean.
Posted by William Serjeant at 9:32 am

Hi
Yours is the first place I have found any information on Charles Violet . If my memory serves me correctly Charles was sailing in the Clyde estuary in the 1950's in a new boat which he built with a new method of connecting the planks. He used to race with our club I can't remember the name of the boat. Would you have any more information. I left Scotland in 1964 and am now retired in the interior of B.C. Canada and building model boats and Greenland skin kayaks. Thanks iwill enloy reading your blog.Robin

Cynde and Robin Russell said...
This comment has been removed by a blog administrator.
6:24 am

Just read Solitary Journey by Charles Violet, wonder what happened to him after this voyage on the Nova Espero

richard bryon said...
This comment has been removed by a blog administrator.
1:39 pm

In the summer of 1951, My girlfriend and I were on the waterfront in Shelburne, Nova Scotia and I took a picture of a small boat at the dock near Cox's warehouse. I was told that the boat had sailed across the Atlantic. I was 18 years old at the time. I didn't meet the crew and had forgotten all about the boat or the picture. Recently I was looking at some old pictures to post on a Facebook site memorializing old times in my hometown of Shelburne. Although the snapshot was only 3" x 3" I was able to make out the name with a high powered magnifying glass: 'Nova Espero'. I Googled the name and found a page of the Yarmouth, England newspaper with the story of the Smith Brothers building the boat in Nova Scotia and sailing it to England. I was puzzled as the boat was not the same as the one in my snapshot, and there was no mention of the Smiths' sailing the boat back to Canada. Your blog clears up the mystery. The boat in my picture has a cabin on it and a second mast and is obviously the boat pictured in your blog. So the Smiths' must have sailed along the coast of Nova Scotia on their way from Newfoundland to New York, and stopped in Shelburne harbour enroute. I tried to paste an image of the snapshot, but was unable to get it to attach. email me and I will be able to send you the picture.

Hi this is Charles Violet junior. Charles violet senior moved to Lampeter, Wales in the 70's where he had a small holding and a boat "Nova Espero the 2nd" in Fishguard harbour. He died at the age of 94 in 2007 a happy man.

Thank you all for your comments with additional information.

Hi there. Your blog was very interesting to me because Stan and Colin Smith were my uncles. However, I was born in Australia and my modest mother told me very little about her intrepid brothers' incredible journey. I learned most about it when I discovered their book "The Wind Calls The Tune". In fact, that's how I discovered your blog - I'd put in a search for that name as my Nephew, Steve O'Shea, has written a fabulous song about their journey. And the story continues ...
Regards, Sue

Hi Bill, It has been lovely to read your blog and see that after so much time people are still interested in Charles Violet and Stanley Smith. Myself and Charles's son have been going through some of Charles old books and objects in the attic and were wondering how we would go about valuing some of these things or even if anyone has any interest in them. Unfortunatly we are quite clueless and have no idea of where to start looking. If any of your followers know of anyone that collects sailing memorabilia could they contact me on helend_666@fsmail.net. Any information would be helpful thank you. we have allsorts including a 1934 Thames Estuary cruising chart that would have been with Charles and Stanley on their travels on the Nova Espero. If this comment is not allowed Bill please delete. Thank you. Helen

Hello Helen
We believe that we may be your cousins?, Charles Violet was our uncle.

Hi Sue Taylor, I hope you get this message, Stanley Smith was my Grandad. I've past this article onto my mum - would love to get in touch!

Charles Violet designed a 27ft Yawl in conjunction with John Love (the wee man) of General Developments Glasgow Built over frames with 1" batons routed to take a dowel then dressed off and cascover sheathed. Internal bulkheads were cut from aircraft quality composite plywood sheets.
I sailed "SEA KING" on the Clyde and up the West Coast early seventies and met Charles Violet when he was working at Stone. Charles built a GRP mast for her after an unfortunate accident to the main mast at McAllisters at Dumbarton She was probably the first boat to have an "S" drive from the engine to feathering prop which was ridiculed at that time!
There was a GRP mould taken from her but very few mouldings were laid up one was for sale a couple of years ago on the South Coast but was attributed to a different designer but once seen never forgotten

The new book about the history of the nova espero link

Thank you Helen. Wishing you a great success with the book.