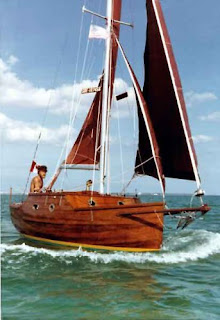 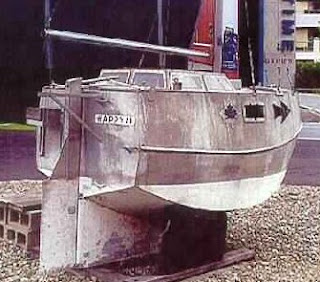 
In 1959 John Guzzwell completed a circumnavigation aboard his 21 foot, self-built yacht, ‘Trekka’. At the time he unwittingly set a world record for sailing the smallest boat around the world single-handed.

Twenty three years later, in 1982, Howard Wayne Smith was attempting to take the record from Guzzwell, when his 13 foot 10 inch Benford sloop, ‘Happy’, came to grief on Nouméa Reef, New Caledonia. He had already sailed 10,000 miles from Miami, Florida, through the Panama Canal to the Galapagos Islands, and the Marquesas Islands. Undeterred, he built a smaller yacht, ‘Happy 11’, from aluminium; she was only 9 foot 6 inches long, but because of her construction she had almost as much usable space as ‘Happy’. Unfortunately Howard lost possession of his boat when she was confiscated by the Australian Customs, which appears to have put paid to his ambition to become the sailor of the smallest boat around the world.

Serge Testa was the next aspirant, when he set off to sail around the world in 1983 aboard ‘Acrohc Australis’, an 11 foot 10 inch aluminium yacht. He completed his circumnavigation in 1987. His record for circumnavigating in the smallest vessel stands today!

To beat Testa, whoever does it will most likely need a ‘yacht’ not dissimilar to Howard’s ‘Happy 11’, but no longer than 10 feet - if he is to retain the record for a good while. I believe this is the smallest vessel capable of doing it, by solving the equation of victuals divided by average speed. Enough food has to be carried, while freshwater can be made from saltwater by using hand operated converters, but the vessel’s speed has to be fast enough to sail the longest leg of the voyage before food runs out. If all goes well, this may be no longer than 3,500 nautical miles, taking 58 days at 2.5 knots. Roz Savage, while rowing her boat from California to Hawaii took just under 100 days to cover a distance of 2,598 nautical miles and she had some food left over.

For those who may not want to make a circumnavigation in the ‘smallest’ yacht, but have aspirations of sailing around the world in a small yacht, I would suggest looking at Jay Benford’s ‘Happy’, John Welsford’s ‘Fafnir’ and Tom MacNaughton’s ‘Farthing’. All three capable little vessels have similar dimensions and displacements.