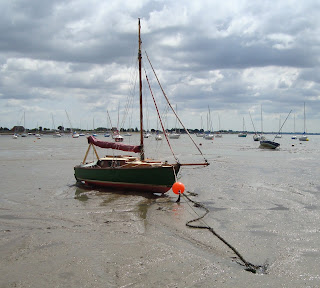 My stomping ground for sailing my boat is the South East coast of the UK, primarily the River Crouch where I have a mooring. A frequent visitor to the Crouch is Charles Stock, who will take his tiny gaff-rigged ‘Shoal Waters’ up to Battlesbridge, where he will let her settle beside the ‘Hazel May’, a resident, barge-type motor cruiser. If the weather is settled, at high water, the next day, he will sail his boat back to her mooring on the River Blackwater. It is there I took the photo you see above. Charles is about my age, but I am convinced he has done considerably more sailing than me over the years. Who else would sail forty weekends, most years, averaging eighty miles between a Friday night and a Sunday evening, other than Charles? He’s a man of great character who truly practises what he preaches, i.e., enjoy sailing and have adventure on a low budget. He champions the small boat in preference to the large expensive yacht, making a compelling case that small boats give the greatest fun.


Since 1963, when he first launched his faithful ‘friend’, he has sailed her solo, and often with his wife, around the Thames estuary, the Broads, East Coast Rivers, and as far as the Solent, totalling well over 70,000 miles - that’s about the equivalent of two circumnavigations! What is even more remarkable is that ‘Shoal Waters’ does not have an engine. I cannot attempt to put into words my admiration for his achievement, though I am certain he would not brag about what he has done. On the contrary, if he tells of his adventures in magazine articles or in his excellent book, ‘Sailing Just for Fun’, he does so for entertainment and for passing on his hard-won knowledge to those who will wisely take in and learn from what he has to teach.


I highly recommend a visit to Charles Stock’s web site, but don’t be surprised if you spend hours exploring the many pages of sheer delight. You will want to return time and again.