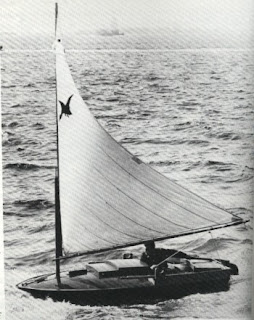 
Sneak boxes have a history stretching back to the late 1800s when Nathaniel H. Bishop immortalised them in his book ‘Four Months in a Sneak Box’. He rowed and sailed down the Ohio and Mississippi Rivers and along the Gulf coast. Later, in 1925 Slade Dale and Frank Coyle sailed their identical sneak boxes from New York to Miami via the Intercoastal Waterway. Their boats were equipped with sails, oars and outboard motors.

The average length of a sneak box is 12 ft, and their unusual spoon-shaped bottom and bow allow them to skim over the water, rather than through it. Their 5 inch draft and 4 ft beam provide considerable stability, ideal for their original purpose of duck shooting and fishing. The name ‘Sneak Box’ came from the fact that the low profile of the boat enabled her crew to ‘sneak’ almost into a waterborne flock to obtain an advantageous position before discharging their shotguns. With their fin shaped centreboards and ample sail area they could sail well on the wind, but rowing against the wind could be hard work.

The traditional home of the Sneak Box is Barnegat Bay, where the class has been adapted for racing under sail.