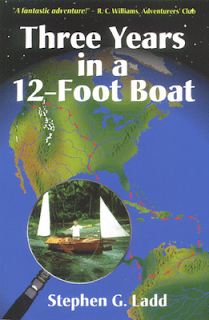 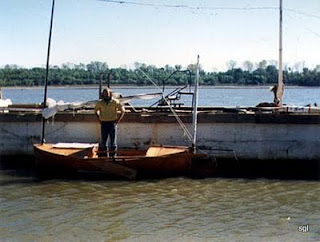 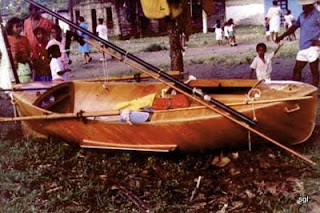 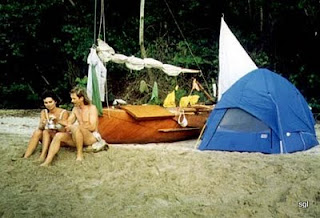 ‘Three Years in a 12-Foot Boat’ by Stephen G. Ladd, tells the story of the author’s wanderings while living aboard a tiny boat he designed and built. Setting out on August 11th 1990, Stephen embarked on the most incredible adventures while rowing and sailing ‘Squeak’ from the Rocky Mountains via the Milk River, Missouri River and the Mississippi to New Orleans. From there he shipped his boat to Colon; then with difficulty, he worked his way along the Panamanian and Columbian coasts to Buenventura. About half way there, near Bahia Solano, he survived a harrowing capsize at night. After recuperating, he arranged transport over the Andes to the head of the Meta River, and from there continued to the River Orinoco and the Pacific Ocean. Open water, strong winds and fast currents between the islands of the Lesser Antilles brought more difficulties, including capsizes, but the adventurer persevered, eventually making it along the South coast of Haiti and the Dominican Republic, from where he sailed along the North East coast of Cuba, until eventually he crossed the Straits of Florida, to arrive at Miami on May, 17th 1993.

Notes
Stephen had more than enough adventures, including: avoiding pirates, struggling against wind and tide, sleeping on his boat while drifting on the ocean, illness, romance, being robbed at knife-point, living on desert islands, meeting a wide variety of people of different cultures, exploring rain forests, travelling at night to avoid guerrillas, snorkelling, altogether travelling 6,500 miles on water and 8,500 on land and by ship.
The best thing about his book is the way it is written with so much description, expression and inhibition, so that one gets to know the author and the way he thinks.

Construction: 2 layers of 1/8” fir, diagonally laid with epoxy bonding and sheathed with fibreglass

Accommodation: one cabin with a full-length berth, plus 4 watertight compartments