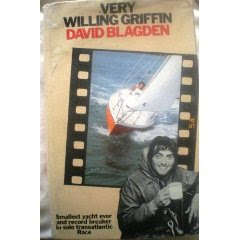 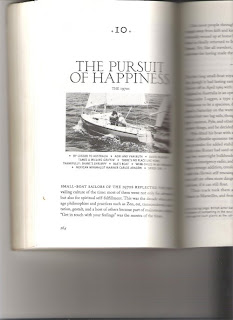 'Willing Griffin' scanned from 'A Speck on the Sea' by William H. Longyard 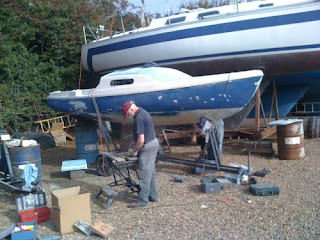 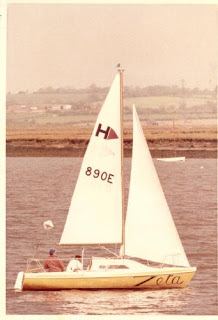 In 1977 I purchased a Hunter Europa 19 kit from Peter Poland’s Hunter Boats Ltd at Rochford, Essex. I had heard of David Blagden’s success in racing a slightly modified Hunter 19 in the 1972 Observer Single-handed Transatlantic Race, and on the strength of that, I had confidence that the Oliver Lee designed boat would look after me in my attempt at sailing to the Azores and back in the improved version of the Hunter 19 - for that’s what the Europa 19 was. Originally, Oliver Lee designed the 19 foot Squib for club racing and she became a great success, eventually gaining National status. Peter Poland asked Lee to add a ‘lid’ to the boat so that she could be raced in JOG events across the English Channel. Lee agreed, and she was named the ‘Hunter 19’, obtainable as a finished boat or in kit form, with a choice of deep or shallow fin keels. The main difference between the Hunter 19 and the Hunter Europa 19 was the increased volume of her cabin which was achieved by adding a few inches to the upper moulding above the sheer line.


David Blagden authored a book, ‘Very Willing Griffin’, which tells of his wrestling with the waves during Atlantic storms and of putting into the Azores to replace drinking water that had become contaminated. His 19 foot boat was the smallest ever to participate in an official transatlantic race. ‘Willing Griffin’ was like David in his fight with Goliath when compared with the giant 128 ft schooner, ‘Vendredi Treiz’, which took second place, and had already finished the Race before Blagden left the Azores. Undaunted, Blagden continued through calms and storms to finish on handicap in 10th position out of fifty-nine competitors. In the minds of many, ‘Willing Griffin’ had vanquished ‘Vendredi Treiz’. Blagden had blazed a way for small boat ocean racing, and inspired by what he achieved, Bob Salmon who had also been a competitor (retired) in the same 1972 Observer Single-handed Race, organized the first single-handed transatlantic race for yachts under 21 feet, the Mini-Transat, now renamed the Transat 6.50.


The Book at Amazon UK, ‘Speck on the Sea’ by William H. Longyard

I also bought Davids book a few years ago and am the proud owner of a hunter 19 which I bought in Wales and now lives next to my parents house in Denmark where she sails on the baltic. (Trailed across Holland and germany in my wife's Rav 4)

What a lovely sailer she is - stable, safe and fast (and tows easily). and has taken my father and I on some pleasant outings.

I knew David in 1973 when he worked as Sailing Director the film 'Swallows and Amazons'. He also played the part of the Policeman. We all adored him. I've been writing about the making of the film on my blog ~ http://sophieneville.net/


We heard that David never returned from he next trans-Atlantic crossing and it was presumed he went down. Do you know if this is true?

I believe David died as a result of a sailing accident in the North Sea.