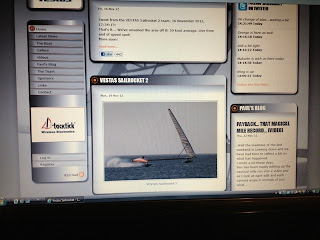 
'Vestas Sailrocket' skippered by Paul Larsen has broken the world speed sailing record over a distance of 500 metres! Larsen and his team aimed to sail their boat faster than the previous average speed of 55.65 knots. This was achieved by Rob Douglas sailing a kite board on 28th October, 2010 at Luderitz, Namibia. Sailrocket’s average speed at Walvis Bay, Namibia, on Sunday, 18th November 2012 was 59.39 knots! Officials recorded her peak speed at 64.87 knots!!


You can find a firsthand account of what happened by visiting Larsen’s blog for 22nd November, 2012 – It can be found at the 'Vestas Sailrocket' website.* Search for his 12.43 posting. 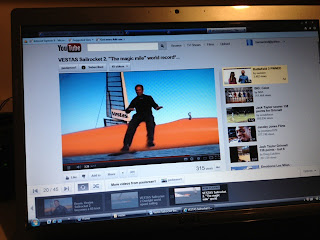 
Congratulations on achieving both the 500 metres and the 1 nautical mile speed sailing records.

Posted by William Serjeant at 8:29 pm