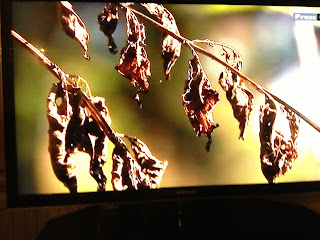 A pernicious disease known as Ash Dieback (Chalara fraxinea) has well and truly been established in our native ash trees. There are theories as to how this came about, but there is evidence that a batch of infected trees was imported into a Buckinghamshire nursery and since it was discovered there in February of this year, trees with the disease have been found elsewhere, notably at a Scottish Forestry Commision woodland west of Glasgow, a college campus in South Yorkshire and in County Durham. Further cases have been recorded in East Anglia; disturbingly these have no connection with the initial outbreak, which could open the possibility that air borne spores from the Continent may be responsible for spreading the disease. Early in November more cases were found in Kent and Essex. 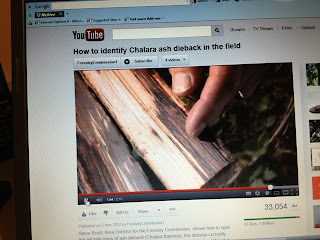 As long ago as 1992 Ash Dieback was rampant in Poland and it has spread elsewhere in Europe. Already 100,000 young trees in the UK have been deliberately destroyed in an effort to prevent the disease spreading. It is hoped that certain mature trees will survive, which will enable scientists to learn of resistant strains for future propagation. Meanwhile we are left with the dreadful prospect that Chalara fraxinea will devastate and reshape our countryside, as about one third of our trees are of the ash species. Bird and insect life, and flora associated with the ash will be badly affected.


We are reminded of the killer Dutch elm disease of the 1970s and 1980s which all but wiped out thousands of wonderful elms that graced our hedgerows and copses. Other killer diseases such as ramorum, responsible for devastating Japanese larches in Wales, and Northern Ireland, and Acute Oak Decline (AOD) that radically affects both sessile and pedunculate oaks, further threaten to reshape our countryside.


This is not all doom and gloom, because it has helped draw attention to lax import practices that need to be changed. We could learn a great deal from Australia in this respect. There the importation of living species, plant or animal, is rigorously monitored, with big fines for those who try circumventing their regulations. Our Government’s Emergency Response Committee (COBRA) has been forced to take action with the aim of bringing resources together to tackle the current problem. Members of the public are being asked to report sightings of diseased trees for collating the findings on a Google Map.* Reports of sightings can be made via iPhone and Android Apps and online through home computers. You can sign up for the Ashtag project for collating sightings here: http://ashtag.org/ .


Ash dieback: Disease will be 'impossible to eradicate'


How to identify Chalara ash dieback in the field


Ashes to ashes: Why is dieback making the headlines?