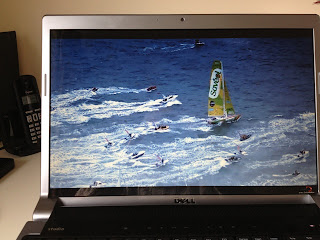 Into the fifth day of the Race there’s no more than 8.2 miles between the leader, François Gabart aboard ‘Macif’ and Bernard Stamm in third position, racing ‘Cheminées Poujoulat’. Armel Le Cléac’h, skippering ‘Banque Populaire’, is only 2 miles behind the leader. This is close racing indeed!


Not all has gone well with some of the competitors.


Marc Guillement’s yacht ‘Safron’ struck an underwater object causing the loss of her keel. Fortunately Marc was able to make it back to Sables-d'Olonne. Understandably, he has retired from the Race.


Skipper Javier ‘Bubu’ Sansó reported that the mainsail track of ‘Acciona’ had been damaged, and he hoped he would be able to repair it when in smoother water at the Canaries.


'Groupe Bel' suffered damage when she was struck a glancing blow by a fishing boat.  Her skipper, Kito de Pavant is heading for Les Sables d’Olonne as fast as he can to effect repairs to his yacht before 1300 hrs on 20th November, because that is the cut-off time for restarting.


Louis Burton’s 'Bureaux Vallee’ was a second yacht involved in a collision with a fishing vessel. It happened at 0300 on Wednesday, 14th November about 400 nautical miles to the West of Lisbon. The yacht sustained damage to a shroud. Burton is heading back to Sables-d'Olonne for repairs.


Zbigniew Gutkowski has had electrical problems with ‘Energa’s’ alarms, her self-steering and her hydraulic keel, but from the official progress chart, the yacht seems to be back on track doing 12.5 knots on a course of 235 degrees heading to the East of the Azores. I hope he has been able to resolve the problems.


My favourite, Mike Golding aboard ‘Gamesa’ is in 8th position, only 142 miles behind the leader François Gabart. My 2nd favourite, Alex Thomson, skippering ‘Hugo Boss’ is doing better in 4th place, 86 miles behind Gabart, and my 3rd favourite, Samantha Davies sailing ‘Savéol’ is 13th. May they do well, and I pray that God will keep every competitor safe.

Posted by William Serjeant at 10:01 pm