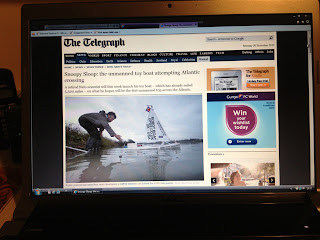 If you are into model sailboats, the Microtransat Challenge website is well worth visiting. The ultimate challenge proposed is to design, build and set sail an autonomous, small, unmanned yacht (not exceeding 4 metres) with the aim of getting her across the Atlantic propelled solely by wind.


Boats must start on the European side of the Atlantic and finish on the American side. The finish line is between 10 and 25 degrees north, along the 60th degree of western longitude. The start line stretches between 48 and 51 degrees north on the longitude of 7 degrees 30 minutes west. Because there must be a distance of at least 40 miles between where the boat is launched and the start line, she could depart from one of several places. Vessels must sail autonomously from the departure point to the start line, cross it from east to west and continue under their own sail power until crossing the finish line.


There are a number of technical challenges to overcome. Boats must transmit their position every 24 hours. If this fails over a 10 day period a vessel will be disqualified. There must be no radio transmissions to the boats, but they can be pre-programmed to sail to specific waypoints. Any mechanical operations required for tiller steering or sail adjustments must be powered from onboard resources; for example, solar panels, batteries or wind operated gizmos. The only means of propulsion shall be the wind. Vessels must display an all-round light capable of being seen from 2 nautical miles during periods of darkness.


The closing date for starting the Race is 31st December. A French team, ENSTA Bretagne http://www.microtransat.org/2012_ensta-bretagne_boat.php  launched their boat earlier this year, but transmissions from her have failed. Something catastrophic may have happened; not that she was capable of causing serious damage to other vessels, but she may have collided with a larger one, or she may have been overwhelmed by the seas. Perhaps she continues on her way and will eventually cross the finish line without anyone knowing.


A British entry, ‘Snoopy Sloop’, built by Mr Robin Lovelock, a retired NATO scientist, will be launched this week in an attempt complete the crossing.


One thing that intrigues me is what antifouling would be best. Any weed growth would jeopardise the mission. The smaller the vessel, the more she will be impeded by marine growth. Thin copper sheathing could be ideal for preventing marine growth and at the same time act as ballast. Perhaps antifouling should be applied to the decks, since they will often be under water or sprayed with water. A bird or two may want a free ride! That could foul her up a bit. Ugh.