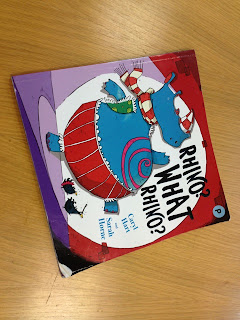 On Sunday, 14th October I did an article about Claire Freedman’s fun book for tiny tots, ‘Monstersaurus’.* Max made a comment and drew my attention to another children’s book, ‘Rhino? What Rhino?' He liked the lyrical quality and said his 3 year old enjoyed having it read to her over and over. I did a bit of Googling and decided to get hold of the book for my youngest grandchildren. They will be 6 in February of next year.  They loved the story, and like Max’s daughter, they wanted it read it over and over again. I loved reading it too! 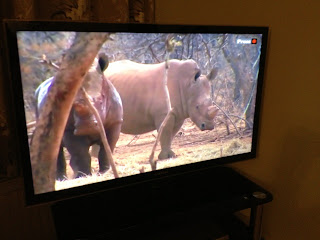 The title, ‘Rhino? What Rhino?’ is poignant and topical when seen in the context of rhino poaching in South Africa. Today the BBC TV News tells of the slaughter of hundreds of Rhinoceroses for their horns which are valued as traditional medicine in China and Vietnam.  The black market price for rhino horn is said to be in the region of £40,000 (65,000 US dollars) per kilo! That’s more than the price of gold. There is a mistaken belief that rhino horn has healing qualities, but it is almost identical in nature to our fingernails, and there is no verifiable medical research substantiating the claims of those who dupe people into buying powdered rhino horn.


If poaching continues, rhinos will become extinct, or only survive in highly protected compounds for breading purposes and for preserving the species. Some progress is being made on cracking down on poachers. There have been several arrests and imprisonment of perpetrators. GPS technology is being used to monitor rhinos. Tiny GPS chips have been inserted into the dead parts of their horns, so that the animals can be tracked. If unusual behaviour occurs, the chips wirelessly activate alarms at the game warden’s base station.


Genesis 1:26, 27  ‘Then God said, “Let Us make man in Our image, according to Our likeness; let them have dominion over the fish of the sea, over the birds of the air, and over the cattle, over all the earth and over every creeping thing that creeps on the earth.”’


‘Dominion’ in this context means to rule over, to be responsible for. Unlike the animals, Man’s role was to husband the creatures God created, not make them extinct!


‘Rhino? What Rhino?’ at Amazon


The Rhino Poaching Crisis Is So Bad, the South African Army Has Stepped In