A Rainbow of Promise and of Hope 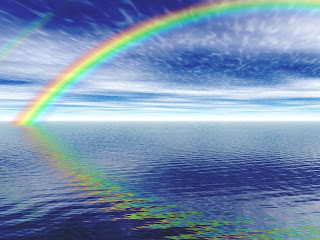 For a full size rainbow photo see link below**
We live in bleak times, or so we are led to believe. Perhaps things aren’t as bad as they seem, and there will be a future?


The U. S. election results are out today, and President Obama has been given another fours years to fulfil his promise, i.e., his pledge to lead the States forward to great heights. In his victory speech* he said that by their spirit people had triumphed over war and depression and his desire was for them to press forward with the goal of perfecting the Union. He maintained the best was yet to come and that by pursuing their dreams it would be accomplished.


Times have indeed been bleak, and the darkest months of the year are upon us. Our British Bulldog spirit has flagged as we’ve been in mourning at the loss of so much: Our troops have been sacrificed in Afghanistan; our banks have suffered near bankruptcy; thousands have lost their jobs; the economy has been in recession; people of repute have been disgraced; devolution threatens to fracture our Country; the Government is divided; Europe is in tatters, and it seems our troubles are never ending.


And yet, there is hope! When we can see beyond a dark winter to spring’s bright rainbow, we can believe, and have hope that summer will provide a golden harvest.


Why the British bulldog spirit is in the genes