The Dove an Emblem of Hope 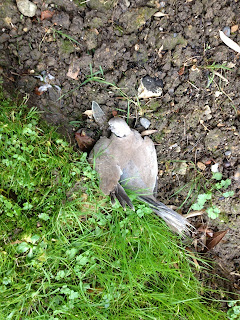 Three days ago I was in one of the front bedrooms of my house when I heard a thud against the window of the back bedroom. Immediately, I knew what it was. A bird in full flight had crashed into the glass. It had happened before; in fact two other birds had struck a ground floor window at the back of the house. To my knowledge not one has made such a catastrophic mistake when approaching the front side of the house which faces south. Presumably birds see the glass because direct sunlight is reflected from it. That cannot happen on the north side, so a bird could be fooled into thinking there was nothing to stop it flying into the room.


I remember checking out a bird that crashed into a north facing window on the ground floor. The poor creature was badly stunned. However, there was nothing I could do for it, but within ten minutes it had recovered and flew away. The other wasn’t so fortunate, dying on the spot, as indeed was the case with the recent incident.


An examination of the dead bird revealed it was a juvenile Collared Dove, probably no more than two or three months old. A pathetic and sorry sight greeted my eyes. The deceased bird limply lay on soil by the verge of the lawn. I looked for signs of life, but there were none. This emblem of hope had no hope; it would never fly again. I could not give it the kiss of life. It would simply rest there on the ground, not knowing or sensing anything. Unexpectedly it lost its life.


Tropical storm Sandy caused great devastation and the death of at least 90 people, none of whom would have known they were to die because of the storm. I am convinced that billions who have heard the news will feel a great sadness because of this awful tragedy. Many will be in prayer for relatives and for survivors who have lost so much, in some cases all that they had. My heart goes out to those who mourn and to those who are homeless, grief-stricken and totally bewildered.


They will feel that their dove of hope has died and that they have no hope. This is more than they can bear. I would like them to know that I share their grief. I grieve with them, and I am so very sad. I pray that they will take hold of the words of Jesus, “Come to me all you who labour and are heavy laden, and I will give you rest.” (Matthew 11:28)


Posted by William Serjeant at 9:47 pm