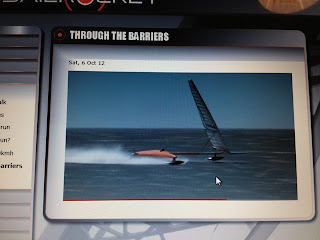 On 4th September, 2009 the hydrofoil trimaran Hydroptère, sponsored by DCNS, achieved an average speed of 51.36 knots over a distance of 500 metres. No other vessel had sailed as fast, and the record was ratified by the World Sailing Speed Council. She also achieved an average speed of 50.17 knots over one nautical mile. No longer sponsored by DCNS, Alain Thébault, the skipper, and his team have set themselves a new agenda with the aim of breaking long distance speed sailing records.


Rob Douglas holds the record for sailing a vessel 500 metres faster than any other.  On 28th October, 2010 at Luderitz, Namibia, he sailed his kite board at an average speed of 55.65 knots. This was achieved on flat water, along a 750 by 3 to 5 metre wide trench cut into sand at Luderitz beach. Douglas sailed his board 4.19 knots faster than Hydroptère.


Another team endeavouring to break short distance records is that of Vestas Sailrocket. They are extremely happy with their Mark 2 version, which according to their data, on 12th November attained a top speed of 61 knots plus, averaging 54 knots. (I guess that was over a distance of one nautical mile.) They have been doing a lot of research into foils and they think they have hit on the right formula for breaking through the 50 knot barrier. This is a critical speed for objects passing through water. It can be likened to when an aircraft flies faster than the speed of sound.

Posted by William Serjeant at 1:00 pm