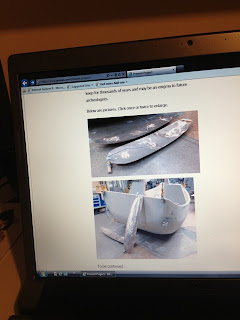 I am intrigued with Sven’s latest project – to design, make and sail a 10’ boat alone around the world. As far as I understand it, he truly does want to complete a full and proper non-stop circumnavigation, starting from Southern Ireland. He plans to sail south through the North and South Atlantic before continuing eastwards south of the Cape of Good Hope and onwards passing south of Australia and Tasmania, then south of Cape Horn. From there he intends to sail northwards crossing the equator for a second time, eventually meeting his outward track in the North Atlantic. At that point he will have completed his circumnavigation, but he will continue northwards with the aim of sailing north of the British Isles from where he will head for Sweden. There his epic marathon will come to an end.


If he is successful, he will have achieved something quite remarkable. He will have set a new world record, that of sailing around the world in the shortest boat. I think he will also be the oldest to have sailed non-stop around the world. Minoru Saito* at the age of 77 is the oldest to circumnavigate the world, but he did not do it non-stop. It took him 1,080 days, finally putting into Yokohama, Japan.


Sven is not interested in breaking records, but he has taken up the challenge set by the Around in Ten group** - that’s to sail a 10 foot boat around the world. Most of all he enjoys solving problems, theoretical and practical; he gets a kick out of building boats he has designed;  he loves being on the ocean alone, especially aboard a small sailing boat. He feels alive when he is not distracted by the trappings our noisy, materialistic world. He seeks a spiritual dimension that he believes can only be found in the vast emptiness of the oceans. There he is close to nature and a part of it. Sven also likes keeping fit, eating healthily, maintaining an active mind by playing with ideas, both abstract and concrete. He derives great satisfaction from reading.


Encapsulated in his nutshell boat he will be happy. He will have thoroughly prepared for the voyage, even taking with him a crash helmet for protecting his head when his boat will be tumbled around in the wild seas of the Roaring Forties.  When conditions permit, he will swim at least once a day. He will further exercise by peddling a homemade generator for topping up the ship’s batteries. His food on the whole will be bland, and it will not require cooking.


Out of Sight, but not out of Mind –Sven Yrvind