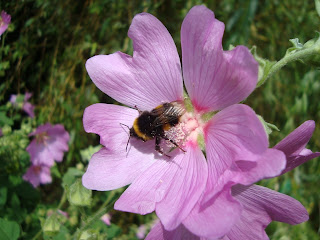 I’ve been meaning to draw attention to the fact that I’ve only seen one bee and no wasps this the year. Since it is now winter, I think chances of spotting any before the year is out are very unlikely. The situation is dire. The importance of bees cannot be emphasised enough. At least a third of the food we consume comes from plants that depend on bees for pollination.


My plum tree yielded only one fruit, and it was inedible because of disease.


There’s a remote possibly that the bee I photographed in my garden on 26th August was the one that pollinated a blossom on my plum tree to bring about the rotten plum.


I was relieved that there was a total lack of wasps this year because they are a nuisance when having outdoor barbecues. Wasps are evidently drawn to beef burgers and sausages, no doubt by their characteristic smells. However, like bees, wasps pollinate many plants.


Ezekiel 20:6 ‘On that day I raised My hand in an oath to them, to bring them out of the land of Egypt into a land that I had searched out for them, flowing with milk and honey, the glory of all lands.’


The Pollination of Flowers by Bees and Wasps


What do Wasps Pollinate?


What is Killing Bees?