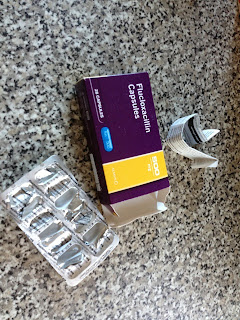 Running around inside my body and yours are millions of tiny organisms collectively known  as bacteria. They comprise 1 - 3 % of our body weight, and the majority live in the gastrointestinal tract, where they break down nutrients, thereby helping us to digest our food. Bacteria also live on the surface of our body and under our eyelids. Generally we profit from having them around, but now and again they can infect open wounds, cause food poisoning and tooth decay.


I recently felt a tender spot on the back of my neck. It didn’t have the appearance of a common boil; therefore I had it examined by my doctor. She confirmed it was an infected cyst, for which she prescribed Flucloxacillin, one of the penicillinase-resistent penicillins. This particular antibiotic is very versatile, being able to fight bacteria infected boils, carbuncles, skin ulcers, abscesses, eczema, acne, wounds and burns. It can also be effective in treating infections of the chest and lungs, the pharynx, tonsils, sinuses and ears.


Penicillin was first manufactured in the early 1940s as a result of Howard Florey’s and Ernst Chain’s joint research, based on Sir Alexander Flemings research into the antibiotic’s characteristics.  Penicillin is a byproduct of rotting fungi and it was originally discovered by Ernest Duchesne, a French medical student in 1896.


There are about 70 antibiotics comprised of 4 types: penicillins, tetracyclines, macrolides and cephalosporins. The more these antibiotics are used, the more bacteria become resistant to them; in so doing superbugs or super bacteria are created for which there are no effective antibiotics. In time, unless new antibiotics can be found, there will be a danger that many people will succumb to new superbugs.


Right now, having completed my treatment by taking 4 Flucloxacillin capsules a day for 7 days I am pleased that my cyst no longer hurts and it has shrunk in size. What caused the infection in the first place, I shall never know. I am also pleased that I did not suffer from any of the numerous side effects Flucloxacillin can bring about, the most frightening being whites of the eye and skin turning yellow, unexplained bleeding, bruising and heart palpitations One in one thousand can suffer inflammation of the bowel and/ or liver; rarely death with people who already have liver problems and are over 50.


Antibiotics according to BUPA