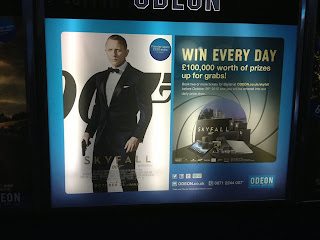 My wife and I went to the local Odeon cinema to watch the most recent James Bond film, Skyfall which is being shown at the 50th anniversary of the 007 films. I have seen half of them, and my wife has seen them all. She is always enthusiastic about these movies. I must admit that they are packed with action which can go some way to make up for the often rather weak storylines. As we don’t frequently visit the cinema, when we do go, we go to enjoy ourselves - that includes sitting in premier seats at the rear of the cinema. These are more spacious and comfortable than the others. This time we had a big surprise, because the total cost came to £18.20! And that was at Senior Citizen rate! I dread to think how much we would have to pay without the concession.  Most likely, when we go again, we shall be satisfied with cheaper seats.


Skyfall was attention grabbing right from the start, but it took me a little while to adjust to the all-surround sound which was exceedingly loud.  I thought Daniel Craig played his part well as the adrenaline seeking, MI6 agent 007. Like all twenty three Bond films, this one irresistibly draws you into a fantasy world of espionage, megalomaniacs, macho minders, killings, techno-gizmos, car chases and crashes, fights, shootings and hair-raising stunts. There are death-defying acts of bravery or stupidity that are filmed at fantastic locations from around the world, and action packed scenes of awesome destruction, such as when a train plunges into a hole made by a bomb. Intermittently there are scenes depicting spontaneous moments of affection between James and various voluptuous females. Some are downright evil; surreptitiously working for the enemy, while others are heroines in disguise prepared to die for their country and for James.


If you can stand the noise and action scenes, I recommend you go along and enjoy a world of glitzy fantasy.