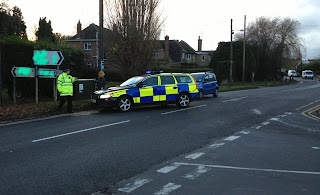 No one is immune from being involved in accidents. That’s a fact, because we’ve all had them - some more serious than others. Accidents are caused by human error, human foolishness, or unforeseen natural events or by a combination of these.


Today a woman was killed and two men were injured when a tree fell on their tent. In Exeter where the accident happened there had been heavy rain and strong winds. It would appear that they had pitched their tent on a roadside verge next to a wall and under a tree. Presumably they chose the location for the shelter, but anyone who knows about camping would never choose to put a tent under a tree. The danger of falling branches, prolonged dripping after rain has long gone, and the chance of the tree being a lightning conductor, are all good reasons for not pitching a tent there. 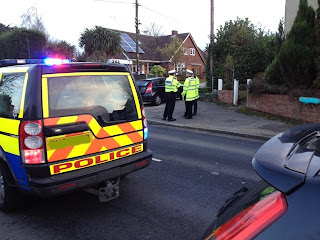 I was taking a stroll this afternoon and I heard the sirens of police cars which caused me to wonder what was going on. Nearing the end of my walk I came across a policeman directing traffic towards the road where I live. There was nothing moving on the main road, but more policemen were gathered at a junction by a stationery van. People were standing by the van that had obviously crashed into something. The front was crunched in and the number plate was missing. Not wanting to upset these people who appeared to have been involved in the incident I passed by without asking what had happened. 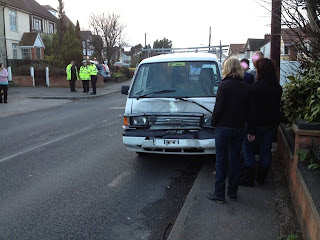 As I continued my walk I thought about the consequences of accidents.
There is always a price to pay. Many accidents could be avoided with forethought; for example when drivers pass the entrances to schools they should slow down and be vigilant. Research by Sainsbury’s Car Insurance reveals that 8% of school run vehicles - 1.6 million* of them! - have been involved in accidents, perhaps mostly because of driver error.

The majority of accidents occur in the home; it’s there that people are relaxed and off guard; things like scalding, getting burnt, tripping on poor floor surfaces, slipping in the bath, missing a step on the stairs - even accidentally electrocuting themselves when replacing a fuse or changing a light bulb! A number of people die needlessly from fire because of faulty alarms or because of carbon monoxide poising, which is a deadly, invisible gas brought about by incomplete combustion, often caused by boilers that have not been regularly serviced.
I say again, there’s always a price to pay or a loss to bear when an accident occurs. Why are some of us so prone to accidents?


Psalm 91:11 ‘For He shall give His angels charge over you, to keep you in all your ways.’