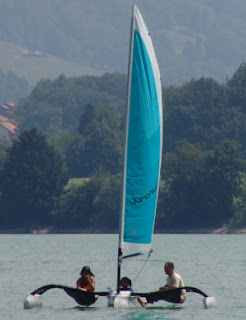 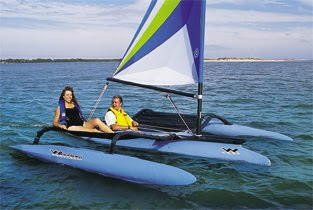 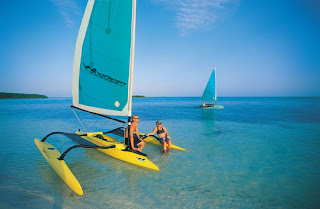 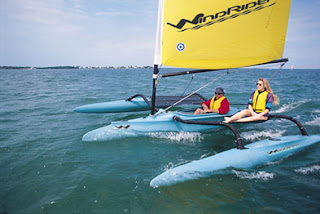 
Yesterday I was considering the Hobie Island Adventure Trimaran, and today I thought I would look at a small trimaran about the same size, i.e., 16’ LOA. The WindRider 16 is actually 16’ 1” by 12’ 7”. Her width provides excellent stability. In fact, the makers claim they have never heard of one being capsized. Stability is a major factor, and WindRider made it a major feature of their advertising campaign since the boat was first produced in 1995. Only recently did manufacturing of this model cease. She has been superseded by the more powerful Windrider 17, but there are sufficient 16s around to warrant me doing this personal evaluation. A few of these value- for-money vessels can still be purchased from UK dealers.


When she was manufactured in the late 1990s she was way ahead of the competition, firstly because of her revolutionary wave-piercing hulls, and secondly, because she was moulded in Polyethylene. Jim Brown, the designer of the very successful Searunner cruising trimaran, was the innovator who came up with these ‘new’ concepts and he put them into his creation, the WindRider 16.


Wave-piercing hulls reduce hobby horsing, and when you think about it, that means distance travelled over the ground must be less than if the vessel has to follow the curvature of every wave. Secondly, the action of wave-piercing hulls destroys the normal sine wave that is formed when a displacement hull passes through water. Long narrow hulls, like those of a trimaran also change the characteristic wave pattern generated by the action of a hull being pushed through the water. The result of these features is that a vessel of this type can go faster than predicted by the accepted formula of maximum speed equals 1.34 times the square root of the waterline length.


Use of the technique of rotational moulding with Polyethylene has the advantage of producing a uniform hull thickness. Polyethylene vessels are almost indestructible, totally watertight, and the material itself can be reconstituted through a specialized recycling centre. If Polyethylene is burnt, there are no negative effects for the environment. The pigmented colour remains consistent throughout the moulding, which means that if the vessel is scratched there is no need to touch up the surface, as would be the case with a painted boat. The fact that the hulls are individually made in one piece, eliminates the possibility of parts delaminating, as could be the case with boats that have their superstructure moulding bonded to their hull moulding.


She’s not as quickly assembled as the Hobie Island Adventure 6.5, but her floats can be joined to her hull in about 3 minutes, and assembled by the solo crew she can be ready for the water in 30 minutes. She can be transported on the roof rack of a car, but using a purpose-built road trailer makes the transition from the car to water easier. She’s no sluggard in her element, be it on the sea or a lake, and with the use of net trampolines, more than one crew can enjoy the experience. Like the Hobie 6.5 trimaran, WaveRider 16 can be steered by her foot pedals or by an optional front-mounted tiller, which makes her suitable for disabled sailors. A number of accessories such as a heavy-weather cockpit cover, a spray skirt, or a windscreen can make sailing the WindRider a more enjoyable experience.


Sailing the trimaran is a piece of cake, because she can be steered by using ones feet, and the sheet can be held in one hand. Her crew sits comfortably on a seat facing forwards and the boom is well clear of the crew’s head. Relaxed thus, he has excellent all-round vision, and if conditions are stable he can cleat the sheet and fold his arms! There is little to go wrong. Learners would find it hard to come to grief. Even if they were to bump the boat into a solid object, the impact would most likely cause little damage to the object because of the flexibility of the hull material, and probably the boat would not be damaged because Polyethylene has the amazing quality of shaping itself back to the original form.


I would certainly consider owning a WindRider 16 trimaran, for all the benefits described above, plus the fact that second-hand WindRider 16s here in the UK (when they can be obtained) are very reasonably priced, say in the region of £2,000 plus, up to £3,000 inclusive of a road trailer. I only wish they had been designed with retractable floats which would have made them more user-friendly.