Leaving a harbour is always easier than finding and entering it for the first time. A good almanac will provide all the information needed for doing both activities safely. Reeds Nautical Almanac, known as 'The Yachtsman's Bible', will have up-to-date details of regulations, signals, buoys, lights, tidal ranges and timings of high and low water. Most importantly, it will describe hazards to navigation such as the underwater extension of the breakwater at Braye. Maintenance of this submerged 500 metre hazard was abandoned in 1872. Thereafter the extension gradually collapsed, leaving a mound of stones and rubble. At low water this obstruction lurks 3 or 4 metres below the surface, so that when the ebb gathers momentum, you can guarantee there will be surface turbulence above what remains of the extension, making it a place to be avoided, especially in bad weather.


When departing for Exmouth at ten in the morning, I made sure "Phillida" was well-clear of the hazard. As I steered a true course of 330 degrees, the wind pushed us along at about two knots, and although visibility was limited to no more than a mile, I was not apprehensive as I had been at the start of the cruise. A mile or so from the entrance, ‘Phillida' bobbed through a bundle of breaking waves associated with a race, which was setting to the northeast. Ten minutes after entering the turbulence we found ourselves in smooth water again. Visibility improved as the sun burnt through the haze. A large ship carrying a cargo of timber passed ahead about a mile away while heading up Channel.


My boat looked pristine. Her sheets had been washed by the sea and bleached by the sun. Her decks were scrubbed, and all was shipshape. Her white sails captured the willing breeze and her captain rejoiced as she skipped over sparkling sapphire waters. Casquettes Rocks, marked by their prominent lighthouse were astern, and with the current setting us clear, those granite daggers could cause us no harm. Another freighter, much larger than her predecessor, cleared our bows as she lumbered north-eastwards, following the wakes of those that had gone before. It was soon mid-morning and things couldn't have been better. The wind oscillated between Force 2 and 3, enabling a boat speed of 3 to 4 knots. Yet another freighter headed up Channel.


Preparing and eating a Marmite sandwich while steering by hand was a tricky business requiring forethought and dexterity. To succeed at making the sandwich without getting the tacky brown-stuff on the tiller and without dropping the knife in the bilge required tactile agility. 'Phillida' was sloshing along at her maximum speed. An undulating swell from the southwest caused me to wonder if the weather would hold, and by mid-day there was not a hint of wind. Without warning the sea became lumpy, and this strange phenomenon caused me to exit the area rapidly by calling upon my willing slave 'Sherpa'. He cheerfully and nobly obliged by habitually first coughing up clouds of blue smoke before exhaling colourless gas. For a short while we merrily continued under power until an obliging, perhaps jealous wind filled our sails.


Apart from a never-ending convoy of ships, I had no complaints – at least they were company of a sort. Conditions were perfect. The early afternoon forecast confirmed that the easterly 3 to 4 wind would continue. I hove-to and bailed out water that had seeped into the bilge. When the boat was moving again I fortified myself with chunks of bread dunked in cold tomato soup, and for a sweet, I consumed a small bar of Cadbury's Dairy Milk Chocolate, along with a handful of McVities digestive biscuits. While I was feasting I failed to keep an alert lookout, and my lack of vigilance almost resulted in 'Phillida' colliding with a semi-submerged tree trunk, but fortune was on my side as ‘Phillida’ narrowly missed the hazard. Could this have been the very object she struck on the outward passage?


For some reason a repetitive rasping sound from the centreboard case caused me some concern, but as we trundled along, there didn’t appear to be anything amiss. I assumed the sound was caused by friction between the metal centreboard and its case due to the boat's motion. Shortly after dismissing my fear, a floating wooden crate came into view, the sort used for shipping bottles of wine, but sadly there was nothing in it except weed and crustaceans. There was no chance of making a quick profit through the generosity of Neptune.

As the sun moved ever nearer to the horizon the wind almost petered out, which meant the combination of wave action and negligible pressure on the sail caused the centreboard to bang against its case. I solved the problem by jamming a short length of rope between the board and the case. About 2200 I hove-to and heated up a tasty paella, which I heartily consumed. It was to provide energy for my night vigil under a breathtaking, starry sky. While eating my meal I kept a wary eye on two ships, one eastbound and the other heading west. The evening forecast predicted an easterly Force 3, becoming northerly 4. I didn't mind a northerly, because ‘Phillida’ performed well on the wind and on that point I could make her self-steer.


Slowly but surely, the wind backed to the northeast, which was ideal for the boat to steer herself. Now and again I needed to adjust the sheets to maintain a neutral balance, but by doing so I could rest for half-an-hour or so between making adjustments. I heated a can of oxtail soup and decanted it into a Thermos flask; then I heard a ship, but saw no lights. Moments later I was surprised to see the long dark outline of a naval vessel possibly engaged in night manoeuvres. Before turning off the Primus I made myself a coffee to keep me awake. Vigilance was needed because we would shortly be entering a submarine exercise area. Caffeine boosted, and having cleaned my teeth, I felt pretty alert. An enormous orange moon slowly rose from the sea as if by magic. She wove a spell of interlaced golden light reflected from oily waves into my receptive mind. Her squiggly pathway over the sea to the cosmos was for the delight of an evening dreamer. So much for vigilance!


Suddenly shaken from my trance by the early night chill I scanned the horizon for dangers. There were none; instead all I could find was my friendly dancing moon who quadrupled herself by sliding to and fro on bendy waves like magic mirrors at a fairground. There was a profound silence as if no other being existed - just me and the golden moon. Have you ever heard such a silence? Venus was shining brightly and a host of sparkling stars were coloured as the rainbow, except those embalmed in the Milky Way. Ahead lay the Pole Star and I recalled the lines of John Masefield’s 'Sea-Fever', "I must go down to the seas again, to the lonely sea and the sky, and all I ask is a tall ship and a star to steer her by."


Enough of poetry! It was a dead calm. We weren't getting anywhere. 'Sherpa' was called into action. What a contrast there was - from perfect silence to ear shattering cacophony - but what a good speed we made over a glassy sea. Ahead there was a yacht on a reciprocal course showing her red and white navigation lights. I drew attention to our presence by shining my torch on ‘Phillida’s’ mainsail. All was well; we passed port to port.


An hour after midnight the wind returned, but, from the north. It allowed me to turn the engine off and sail a course of 310 degrees towards Teignmouth. The wind backed a little, and as it did, I saw what appeared to be lights fairly high up. Were they an illusion, or were they real? Closer investigation confirmed they were the road lights of Teignmouth, and further to the north the little resort of Dawlish lay hidden shrouded in mist. A change of tack found us reaching along the coast at a fair old lick. I periodically sounded with the lead while trying to keep to the two fathom line. My aim was to clear the Pole Sands off Dawlish Warren.


Soon after sunrise, all was revealed. The sands were deserted and I was privileged to witness a weird seascape of golden hues, which in some places contrasted with the dark turquoise water, reminiscent of Turner's masterpiece, 'The Fighting Temeraire'. The tide was flooding, and at 0600 we were beating up the fairway toward Exmouth Dock. When only a cable from the narrow entrance I downed the sails and quickly started the engine to avoid being swept over Shelly Bank. Within a short while, 'Phillida' was snugly berthed at the quay, while sausages, bacon, and eggs sizzled in the frying pan. I sponged up the surplus fat with two slices of fried bread and downed the lot. This was truly a feast consumed with much gusto - no other meal ever tasted so good!


It was a beautiful sunny morning, and as I relaxed, my eye focussed on a few tiny crabs rummaging in bunches of bulbous weed which clung to the dockside, but it was time for action. Wasn't I supposed to visit Customs for pratique, since I had been to a 'foreign' land, and, shouldn't I look presentable at the end of my voyage? Having fortified the inner man, I gathered together my shaving gear, flannel and towel, for refreshing the outer man. A gent's toilet was sure to be nearby, and on the way I could look for the Customs Office and one of those beautiful red phone boxes so that I could let my wife know she was not a widow, and our daughters were not fatherless. 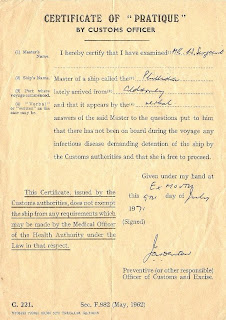 I knocked on the Custom Office door. For a moment nothing happened; then the door slowly opened. A short, rather thin, heavily bearded man reluctantly invited me into his office. After prevaricating by maintaining I did not need proof of a clean bill of health he reluctantly produced a 'Certificate of "Pratique"'. It was my very first, which I treasure to this day.
Posted by William Serjeant at 10:10 pm