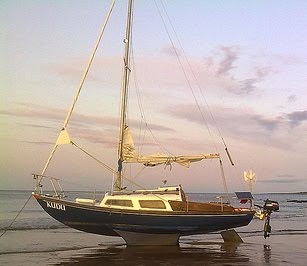 
How come I hadn’t heard of Nathan Whitworth before? Very strange, because when I put his name into the Google search engine, a huge list of links sprang up – some not for the Nathan who set out to sail around Britain in an ancient Newbridge Corribee Mk 1, but I wasn’t interested in the others, even if they warrant a search. When Nathan is not sailing, he is a PHP developer. Yes, that made me think, because I had no idea what PHP is. Wikipedia describes it this way:


‘PHP is a widely used, general-purpose scripting language that was originally designed for web development to produce dynamic web pages. For this purpose PHP code is embedded into the HTML source document and interpreted by a web server with a PHP processor module, which generates the web page document.’


Well, that makes sense to me, so perhaps I’m not quite so ignorant now. Anyway, I accidentally found Nathan’s YouTube videos, ‘Sailing around Britain on ‘Kudu’’. There are seventeen of them in all, illustrating his voyage from Tower Bridge, London to Preston Marina. There he abandoned his attempt to try something different. Kudu is currently up for sale, so if you want to complete the voyage around Britain, now is your chance! Nathan has acquired a 22’ Tyler Cinder with an inboard engine which he says will suit him better for his intentions, and she has standing headroom – no more crouching for the Dynamic Designer of PHP. Meanwhile, Nathan has gone back to work, presumably to pay for the forthcoming new thing. I note that his name is still on the official entry list for the Jester Challenge 2010, which is the trans-Atlantic race for solo sailors, named after ‘Blondie’ Hasler’s famous, junk-rigged Folkboat, ‘Jester’.


Incidentally, at the recent London Boat show, Sir Robin Knox-Johnston presented Nathan with the Little Ship Club’s ‘Suhaili Trophy’, presumably for his exploits with Kudu and for his Practical Boat Owner magazine contributions, his Blog and his YouTube videos.


‘Kudu’ for Sale at Preston Marina