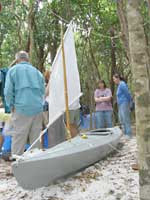 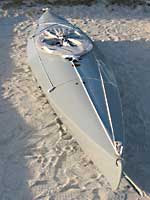 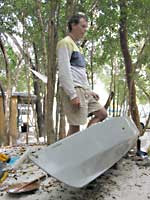 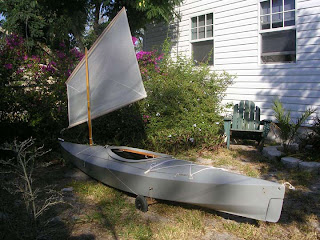 Not the prettiest name for a boat, or in the eyes of some, the prettiest boat to look at, ‘Robroyoid’ is surely a cleverly designed decked canoe. Her designer and builder is ‘Wizard’ of WaterTribe fame – Real identity: Matt Layden who drew the lines of my excellent Paradox, ‘Faith’. Time and again he comes up with original small boat designs, all of them having merit: Paradox, Enigma and Sand Flee, being the products of a free-thinker are three such examples. Matt is an experienced sailor/boat designer who draws from his empirical knowledge and from successful boat designs of the past so as to synthesize his ideas and the concepts of others into practical solutions he incorporates into his own creations.


Having owned several decked canoes, a few of them equipped with sails and leeboards, I was interested to discover as much as I could about Matt’s ‘Robroyoid’, the one-off he designed and built for competing in the Everglades Challenge events. She was smaller than my 50/50 canoe designed by Paul Fisher, but because of this, she would have been easier to portage and despite her shorter waterline length, most probably just as fast. Matt wrote an article* in the WaterTribe web site explaining the merits of shorter canoes and why he believed he was so successful in racing others who paddled longer canoes during the Everglades Challenge races of 2004 and 2005. ‘Robroyoid’ was only 13.5’ long and 28” wide, with a depth of 15”. The dimensions of this boat resembled those popular 140 years ago when John MacGregor pioneered the sport of kayak or decked canoe cruising. Matt simplified the design of his canoe by making her from plywood with a single chine. He gave her a balanced lugsail of about 15 square feet, set clear of the paddler with the mast stepped halfway between the cockpit and the stem. In light of his experience during the 2004 event, he incorporated an integral rudder and reduced the sail area before competing in the 2005 race. Incredibly, he had space for sleeping aboard the tiny craft while at anchor when conditions permitted, which saved valuable race time that could have been taken by setting camp ashore. Undoubtedly, his knowledge of the local waters and conditions likely to be encountered according to wind and tide, gave him an edge on those less familiar with the race course.


I forgot to mention that Matt opted to use a single-bladed paddle in conjunction with the rudder, because he believed it gave less air drag than a double-bladed one, especially when heading into the wind. He was also convinced that being able to paddle on either side of the canoe was beneficial, because it provided relief from repetitive strain, besides causing less chafing of hands than when feathering a double-bladed paddle. The proof of the pudding was in the eating, because he found his ideas worked in practice as he out-paddled competitors by taking fourth in Class 3 (canoes and kayaks with unlimited sailing rigs) in 2004, and sixth out of thirty-three starters in Class 1 in 2005.