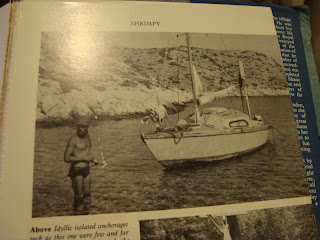 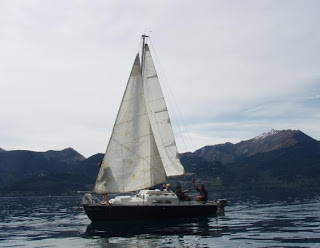 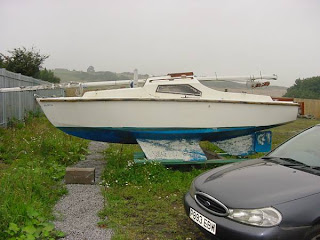 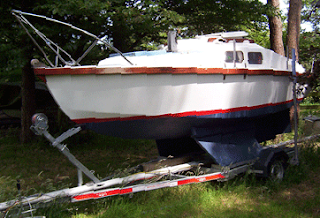 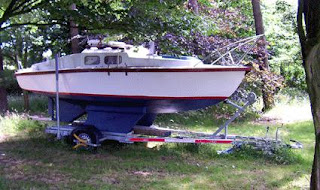 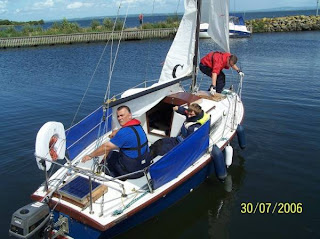 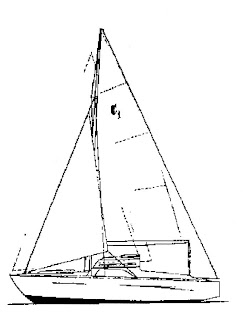 Last December I posted an article* to this Blog about Shane Acton who sailed around the world in an 18’ 4” plywood, bilge keel yacht. She was a Mk 1 Caprice, designed by Robert Tucker, built by C.E. Clark Limited of Hayling Island. A few of these 1960s classic boats are still around, which is a testament to the quality of their build, and the care given to them by numerous owners. As far as I can ascertain, there is no Caprice Owners’ Association**, and that’s a shame because there doesn’t appear to be a source where information can be found about the five different versions, from Mk 1 to Mk 5. I believe the Mk 2 was a composite boat, identical to the Mk1, except she had a fibreglass hull. I also believe the Mk 3 and Mk 4 had the same shaped hull with a chine as the original Mk 1, but they were made of fibreglass. I don’t know what the differences were between Mk 3 and Mk 4, but I think the deck moulding of the Mk 4 had fibreglass combings, instead of wooden ones. Finally, I think the Mk 5 was a round bilge boat moulded entirely in fibreglass. She was longer than the original Mk 1. I feel certain the builders of this larger 19’ 10” version offered a fin keel option. Now, I could be wrong about MUCH of the above, and if I am, please get back to me via the comments section. I’m sure there are a several people who really know what the differences are between the versions.


I remember responding to an advert for the sale of an Mk 1 model. I was impressed by the ‘solidity’ of everything. The construction, in choice wood, was well done, and the rigging was most impressive with twin backstays, double side stays and two forestays. I’m not sure if that was normal for the Mk 1, but everything I looked at was put together to last and to withstand hard use. Inside the cabin there was a satisfying, snugness; a warm homely feeling, and yet the ergonomics were just right for the practical working of the boat. As Shane Acton remarked in his book, ‘Shrimpy’, all things were within his reach when he was sitting or lying on his bunk. Without a doubt, Robert Tucker designed a boat that was a ‘peoples’ boat, affordable, yet seaworthy, and not lacking in performance. The original twin keel version could happily occupy a mud berth, because she was well-supported by her twin keels and skeg. Her transom was strong enough to take a substantial outboard motor and storage space within her cabin under the berths and in the lazarette was more than sufficient for a crew of two. I did not buy the boat because the owner would not budge on the price, which I thought was too high. Today, the Mark 1 can be obtained for as little as £500 to £700, but do have the plywood thoroughly checked for delaminating areas. After all, she will be four decades or more old. A well made, traditionally planked wooden yacht was expected to last for forty years, but plywood boats for no more than twenty years. Therefore, take a good, hard look before parting with your money.


The Book ‘Shrimpy : A Record Around the World Voyage in an 18 Foot Yacht by Shane Acton, was published in 1981 by Patrick Stephens Ltd., Bar Hill, Cambridge, UK.

Nice articule and to confirm the Mk V was sort of round bilge - well rounded off anyway but still a lot of flatish panels in the bottom and topsides.

There certainly was a fin keel version (I have original drawings somewhere).

Thanks for that Max.
I note you have posted a super black and white photo of a Mk 1. I'm preparing an article about the Silhouette, which I hope to put up shortly. I'm planning on coming your way in June while cruising my Seawych 19 to the West Country from the River Crouch. Returning in July, all being well. I would like to sail to Exmouth or Dartmouth - depends on the weather, my health, unforseen events etc .

We owned a Caprice back in circa 1975. She was originally bought as a hull and deck moulding by my uncle who fitted her out. I'd guess that was late 60's early 70s. We later bought her and enjoyed sailing her for several seasons. I believe she was a Mk III, she definately had wooden coamings around the cockpit, as I remember the annual chore of stripping and repainting them! I really must find out some photos. My Dad has some old 8mm cine film of a summer cruise around Rathlin, Islay, Gigha and the Mull and around the Clyde. Someday I'll maybe get it on youtube....
Have always been a great fan of Robert Tucker boats. There is a sillouete lying abandonded on the roadside only a few miles away from where I live. It's been there so long it appears on Google earth.
http://maps.google.co.uk/?ie=UTF8&ll=51.892719,-2.181142&spn=0.000293,0.00085&t=h&z=21

It keeps pleading with me to go and find it a home!

Another Tucker design I've always liked is the Matilda. MAybe one for a future article?
Pete

Pete, Good to hear from you. Google earth is great. I love using it when I want a bird's eye view. Still, your Paradox should more than satisfy you!

I'm in the process of refurbishing a MK,V Caprice (built circa 1980)I plan to have her in the water by May 10. I would be happy to share the sage so far and keen to join any owners organisations.

I have acquired a Mark III Caprice and need to know the mast height.
Does anyone know please?

By interpolation from the diagram above I have calculated a rough answer to your question, i.e., the mast height of the Caprice Mk 1 must be about 21 ft 6 ins. That's assuming the mast is stepped on the deck.

Maybe someone can supply an accurate answer?

Blake said...
This comment has been removed by the author.
6:34 am

I also inherited a Caprice from my grandfather last year. Thanks for posting some information about this type of yacht.

I'm still in the process of repairing the boat though. Although it's still sturdy, ce marking services should still be checked. ce marking service can ensure that all the parts of the boat passed international standards for sailing. That's why most boat owners prioritize that.

I'm looking forward to know about Caprice and boats in general on your blog. Thanks for sharing.

Just bought a Fantastic Caprice 18 mk 1 on Windermere just got to learn to sail :)

Looking at buying a caprice 19ft no outboard sails look in good condition manual bilge pump need antifouling and the bow plate is lifting not a big job . I think its a mkIV or V the guy said make an offer has anybody got a tough ball park figure.

No problem. Please go ahead.

Hi I am a caprice owner also and shes a MK5 too :) utterley in love with her.. fully restored her during covid -19 and will happily share pics and logs of our journey to how she looks now :)

Hi, I hope you get to enjoy her more and more, now she's been restored. I no longer add pages to this blog, but now and again keep an eye on comments.
Bill.