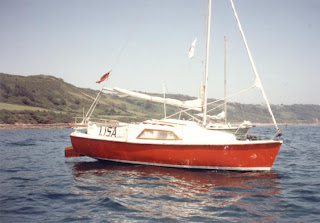 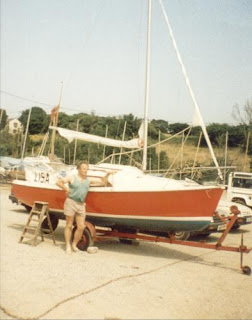 'Lisa' at Feok on her trailer 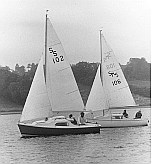 I’ve been a very fortunate chap to have owned several small sailing boats – trailer-sailers among them. A much enjoyed trailer-sailer was ‘Lisa’, my Shipmate Senior. She was 16’ 3” from stem to transom. Her beam was 6’ 3”, and with her centreplate raised she only drew 11 ½ inches. I’m not sure how much she drew when her centreplate was down, possibly 2’ 6”. At only 340 kilograms she was a bit tender, which meant she had to be reefed early and her crew made a difference regarding trim, as in a dinghy. Sitting on the windward side was the best policy. She was like a dinghy with a lid, but her layout cleverly gave the impression of plenty of space within her tiny cabin. Nominally, she had three berths, two on the starboard side and one on the port. Both of the berths placed at the aft end of the cabin extended under the cockpit seats. I would not like to have had more than one other person aboard for cruising. There simply wasn’t enough space to store all the clobber for three people. Because she could be beached, there was no need for a tender, but care had to be taken where she was allowed to settle. Pebbles and shale were out of the question. She had a lifting rudder that was held down with a rubber strop and was raised with a hauling line. She was rigged as a Bermudan sloop. Her mast was hinged at the foot to a miniature tabernacle which made it easy to rig the boat single-handed.


The weakness of my Mark 1 Shipmate Senior was her lack of a self draining cockpit. Rainwater or seawater accumulating in the cockpit had to be bailed out by hand. I nearly came to grief because there were no drains in the cockpit. I was sailing to seaward of Mersea Island, Essex, when an unexpected strong gust laid ‘Lisa’ on her side. Water poured into her cockpit and I became alarmed, because when the boat sprang upright the top of the companionway step was only inches above the water. Getting the bucket from the forepeak to bail out the cockpit was problematical because my weight caused the bow to dip, and as it did so the water in the cockpit swept forwards and almost poured into the cabin. I made a quick exit with the bucket and rapidly bailed out the water. Because of the urgency of removing the water I did not have time to heave the boat to. I just left her to her own devices with the mainsheet loose and the jib sheeted. When I was satisfied she wasn’t going to be swamped by a wave I hove her to and I made a coffee to sooth my nerves. She had been dangerously low at the stern due of the combined weight of the water and me. That brings me to another slight dissatisfaction, the lack of sufficient room for galley equipment, and storage space as a whole, but she was only a small trailer-sailer, so what could I expect. She had sitting headroom and a sliding hatch that allowed the sunshine to enter the cabin on a fine day.


I can’t remember where I kept her anchors and warps, but I do recollect a farcical episode when I beached her at St Mawes. It was during the second year of my ownership, and I was enjoying a cruise in the Falmouth area, and the Helford River. Surveying the beach from the water I had the impression that it was pretty level, without too much of a slope, and that it was sandy near the high water mark. Between the beach and off-lying moorings, I could see there were patches of stringy weed rising upwards, a bit like kelp, and there were numerous large stones protruding from the sand at the low water mark. I planned my moves carefully. First I would drop a stern anchor and pay the warp out as the boat headed towards the beach; and when she touched I would jump overboard and draw her bow up on the sand; then I would take a second anchor and set it well above the high water mark. Afterwards I would manhandle the boat and float her around until her bow pointed away from the beach. (This was taking place about half-an-hour after high water.) All went well as far as setting the anchor at the top of the beach, but when I came to pull the warp at the stern I discovered the Polypropylene line had undone itself from the cleat and was floating twenty or so feet away. There was only one thing for it - swim with another line and attach it to the one that had come adrift. After stripping to my underpants I did it, but not without sustaining a nasty cut under my right foot. Blood spouted out like a fountain. Urgent action was required. I climbed aboard and hopped to the first aid kit, leaving a spattered trail behind me. I managed to stop the scarlet flow by applying a clean handkerchief held in place with a bandage. It was then I noticed how steep the beach was, but I could do nothing about it, because the ebbing water had fallen, making ‘Lisa’ hard and fast. As the water receded I also observed pebbles breaking through the surface of the sand. That night was uncomfortable. I suffered while trying to sleep on an inclined berth resembling a child’s slide, and as the boat floated off, there were the most horrible grindings that convinced me ‘Lisa’ was being torn to shreds, but a later examination of her bottom revealed only a few minor scratches.


I kept my Shipmate Senior for two years, and during that time I towed her by car to Plymouth for a fortnight’s holiday and to Falmouth for another fortnight. I week-ended, quite often exploring my local river, the River Crouch. She was good fun to sail single-handed, but she could not stand up to strong winds, and I was always cautious when the forecast was for anything above a Force 4. A bulb drop keel would have made all the difference, coupled with a rapid self-draining system for the cockpit.


Shipmates were designed by Norman Howard and built at Smallcraft of Blockley, UK. They were first built in 1960. Later models were produced by Seaborne. The Shipmate Owners’ Association has about 100 members.

Just found your very nice blog while searching for shipmates.Its
Nice to see some images of the shipmate Senior. I see you have used one of my shipmate images of Osea Buoy from my site which is infringing my copyright of the image.Its important that all the hard the work by amatuer and professionals involved in producing photography is protected.
My webpage foot note clearly states everything is copyrighted and to contact if you would like to use any of the content within.
Can I suggest that you do this as soon as possible please.
regards Tony aka creeksailor

I apologize for using your photo without permission, and I will gladly remove it if you so wish.

I would be pleased to add a link to your web site which would lead to more hits.

Please get back to me and let me know if you want me to remove the photo and if you would like the link added.

Thank you Tony, I'll be in touch.

I have complied with your request to remove the Blackwater photo.