It was Sunday, the 4th July, 1971, just before eight in the morning. ‘Phillida’ was heading out to sea, and the Exe Bell Buoy lay a hundred yards astern. After setting the boat on her course I took a bearing of the buoy and noted the details in the logbook, along with the time. (The reason for the bearing was to check the boat’s course by taking back bearings.) The early morning forecast had predicted an easterly wind of Force 3 which was ideal for the planned crossing of the English Channel. Exmouth was gradually fading in the mist, and the clanking of the buoy’s bell became fainter and fainter. ‘Pillida’ was heading southeast for my planned destination, the tiny island of Alderney, the most northerly of the Channel Islands.

My boat was a Torbay Class 2 Racer. She had a large cockpit which I covered with a canvas apron. This could be rolled up from the rear to give room for working the boat. In addition to the apron, I made a simple boom tent to provide shelter from the elements for when at anchor, or when on a mooring or when beached for a quiet night’s sleep. She was a gentlemen's day boat typical of the era shortly before the Second World War. She carried a lot of sail on her slender mast which resulted in her having a good turn of speed, but at that moment because there was very little wind 'Phillida' was hardly moving. I reluctantly started the ancient Seagull outboard engine, which for a short time belched blue smoke until there was but the faintest wisp, then none at all. This trusty friend of mine whom I named, 'Sherpa', for his hard work, made an ear-shattering, but reassuring noise, comparable to rusted tin cans clanging together, but he never let me down.

Half-an-hour later, the sun broke through the haze, heralding a light breeze which enabled the boat to move again under sail. To compensate for the set of the ebb I changed course a few degrees to the south. I could still see the entrance of the Exe estuary, where several rod fishing boats lay drifting on the flood tide. The red sandstone cliffs contrasted with the emerald green hills further to the east. Our course would keep us clear of the area reserved for the firing range. A straight line to Alderney was a distance of seventy nautical miles, but by the time of arrival the distance travelled through the water could well be getting on for eighty-five. It would take about twenty-eight hours at three knots, giving an e.t.a. near mid-day, Monday, 5th July.


I needed to conserve my energy. Therefore I set about making the boat steer herself. By slightly backing the jib and easing the mainsheet, while the tiller was lashed a smidgen to leeward, a neutral balance was achieved. 'Phillida's’ wake was marked by a trail of bubbles which were off-set a few degrees from her centre line, confirming she was making very little leeway. I lay down on the floorboards and pulled the cockpit cover over my head to protect me from the sun’s scorching rays. It seemed all right not to keep a proper look out, because in that part of the Channel the likelihood of other vessels being in my path was minimal. Shortly before eleven, the wind petered out, and I could tell by the feel of the boat that she was off course and wallowing. I took advantage of the calm to make a coffee before steering by hand. My galley consisted of a gimballed Primus, bolted to the floor, and a washing-up bowl.


Trimming the sails to every zephyr was hard work, but after twenty minutes the wind increased, and I set the boat to steer herself. The haze returned, causing me to be a little anxious. I felt alone, in an isolated world of my own. There was an eerie silence, except for the sloshing of water along ‘Phillida’s’ hull. To comfort and fortify myself I opened the food box for a helping of cold chicken, lettuce, beetroot and cucumber, which I ate with chunks of buttered cottage loaf. This was swilled down with a generous helping of bottled lemonade. Then I heard the unmistakeable deep-throated sound of a ship's horn. The ominous warning notes were coming from somewhere broad on the port bow, but how far away the vessel was I could not tell. Every two minutes she made her doleful drone. Twenty minutes later the vessel was clear ahead, which meant she was slowly moving to the south-west. I figured this would be in keeping with a ship on course to clear Lizard Point, from where she would take her departure, perhaps for an Atlantic crossing, or maybe to the south, when west of Ouessant. 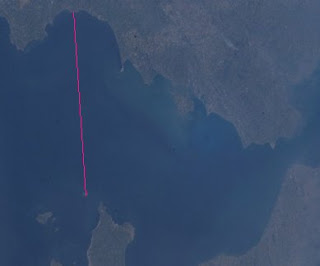 The haze grew thicker, and I suppose I should have expected it, since we were more or less slap in the middle of an area of high pressure. Cold air was falling from above onto warm water below, bringing about a surface layer of condensation. The sky was a perfect unblemished azure blue, but all around there was a thick yellow veil. The wind faltered yet again, so I set 'Sherpa' to work after refilling his tank, and within minutes we were doing a good four knots. An hour-and-a-half later the tank needed replenishing, but the wind returned and visibility improved. How uplifting it was to be sailing, while rejoicing at the chuckling waves spreading ever outwards from ‘Phillida’s’ bow until lost in the vastness beyond the distant haze.


(For the next episode see 28th January)
Posted by William Serjeant at 11:22 pm