'Nautilus’ and the Andrews Brothers 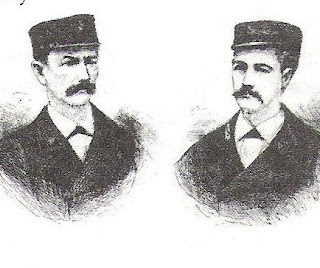 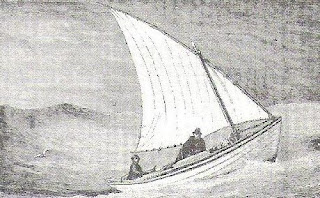 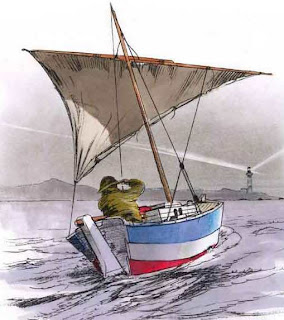 Back in 1880, ‘A Daring Voyage across the Atlantic’, written by William Albert Andrews was published in London by Griffith and Farran. It chronicled the remarkable voyage of the two Andrews brothers who sailed across the Atlantic Ocean in a 19’ lapstrake dory. With the purpose of outdoing Thomas Crapo, who did it in the ‘New Bedford’, they commissioned Higgins and Gifford of Gloucester to build them a dory shorter than Crapo’s. She was fully decked, apart from two cockpits which could be sealed with hatches - one for the helmsman near the stern, and another further forward for the other crewmember. Access to stores and the space where they slept was through the forward cockpit. She was much smaller than her overall length would suggest, because her bottom was only 15’ from stem to stern post. Imagine how restricted her crew must have been when sheltering under her deck during gales. Her total depth amidships was just 2’ 3”. Amazing! Her overall beam at the gunwales was 6’ 7”. Astonishingly, she was not fitted with buoyancy tanks. The brothers relied upon being able to pump or bail the water out. I suppose there was very little room for buoyancy in any form.


‘Nautilus’s’ mast was stepped well-forward, to carry an unusual club-footed lateen sail, which must have been a ‘pig’ to reef, but the brothers spoke highly of it, maintaining the triangular sail worked to perfection. The advantage of their lateen sail was that it could be reefed from the security of the cockpits and there was no need for her crew to go on deck. The sail would have had a least three sets of reefing points used in conjunction with the club-boom, capable of reducing the sail area by up to two-fifths. The flexibility of the lengthy yard would have absorbed sudden loading brought about by gusts. This club-footed lateen sail was very forgiving, because the leech was free to spill the wind – only being restrained by the sheet and the weight of the boom. In preference to the lateen sail, they set a square sail when running before the wind.


One of the secrets of their success was the use of a sea anchor secured to a three-hundred foot line. When it was deployed, they removed the rudder to prevent the boat from sailing at an angle to the wind, and to negate damage to the rudder and its fittings. They also deployed a temporary storm sail, presumably on a short removable mast near the stern of the vessel to feather the boat into the wind and seas. It was just as well they thoroughly prepared for gales, because they were subjected to fourteen of them!


It was 7th June, 1878 when William Albert Andrews and his brother Asa Walter Andrews set sail from Boston, Massachusetts on their attempt to take the record from Crapo. At 3.00 pm the ‘Nautilus’ departed from Mr. P. Coyne’s Wharf, City Point, bound for Paris, France. A large crowd cheered the valiant crew as the little boat made out to sea. The weather was perfect, with a gentle offshore wind, but that night they faced their first gale. After sustaining damage to their sole navigation lantern and the loss of their binnacle lamp cover, they put into Beverly the next day to effect repairs. On 12th June they bravely set sail again, not knowing what their fate would be. William was hit on the head by the boom and he was fortunate not to be killed. Rough weather caused their boat to drift dangerously close to Sable Island off Nova Scotia, but luck was on their side as the wind relented a little - enough to allow them to keep clear, by making way under reefed sail. Some days later they were surrounded by whales, much to the consternation of William, whose remedy was to put them out of his mind by going below and closing his eyes. Now and again the brothers were able to take sightings of the sun with their quadrant, and when opportunities arose they would seek confirmation of their position from those aboard passing ships. On 8th July they reached the halfway mark. Some days later Walter coughed up blood, and they were concerned about it, until they obtained ‘Friar’s Balsam’ from a passing ship. The medicine brought about immediate relief. By 26th July they were over the Great Sole Bank, 48 degrees North and 9 degrees West, and the shallow water combined with a strong wind brought about chaotic seas. After passing the Bishop Rock at the Scilly Isles, they put into Mullion Cove, Cornwall on 31st July, 1878. Only eight days later, and after calling into Falmouth, the triumphant couple were cordially and enthusiastically received at Le Havre, France.


Shortly after returning to the US, Walter died. In 1892 William sailed the 14’ 6” ‘Sapolo’ cedar and canvas boat from Atlantic City to Palos, Spain. This venturesome voyage gave him ample material for a second book, ‘Columbus Outdone’.