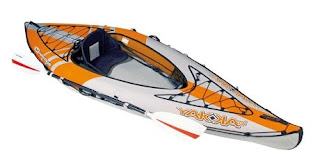 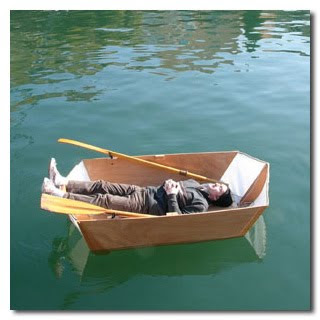 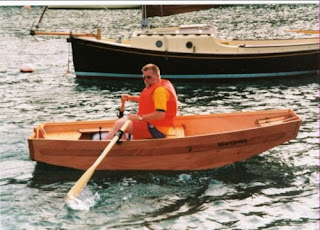 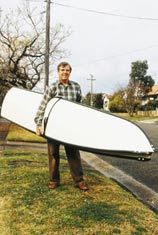 
I’ve been considering what boat I may buy or build to ferry me between the shore and my Seawych 19 sloop. This coming season when I’m away cruising, there may times when I shall need to go ashore for some essential item, or perhaps just to take a walk. A small dinghy that can be stowed in the forepeak would suffice. When I had my very first cruising boat, I found that a small Prout folding dinghy was adequate. She was about 7’ long and 4’ wide, and when folded, she was a wafer-thin 7’ by 1’ 6” by 6” package. This lightweight canvas cockleshell could be ready for the water in less than two minutes, but she had her limitations, such as no internal buoyancy, not much freeboard and she was strictly a one person boat.


Today, there are only a few similar dinghies on the market, such as the ‘Crafty Scamp’, the smallest of the SeaHopper range, but she’s far too heavy and difficult to assemble on a yacht with restricted space. Furthermore, when she’s packed away she’s a lot more bulky than my old Prout – pricey too at £698! What about the Wooden Widget Origami? Well, she is a better proposition, being similar to the Prout. Unfortunately, she cannot be bought off-the-shelf. She has to be built from plans costing £25.00. Then, there’s the smallest Porta-Bote which is too long to fit into the Seawyich’s cabin or to stow on her deck.


An alternative to a folding boat is a pneumatic dinghy, which is the first choice of most yachtsmen. One of the cheaper ones is the Waveline 2.3 at £319.95 – that’s less than half the price of a small SeaHopper! The problem with the Waveline or any other inflatable dinghy is finding a place to blow her up. One possibility is to haul her up the mast until her transom is on the foredeck. There she can be inflated before being lowered over the guardrails into the water. Retrieving her would be a reversal of the process, but it all seems a bit of hassle.


I’m favouring the idea of a one man inflatable canoe. Because she’s not as beamy as a dinghy, she could be inflated on the cabin top. Launching her would be easy. Getting aboard her may not be as easy, but if a single line or painter is attached midway between her bow and stern, that should hold her to the side of the yacht. A nice-looking inflatable canoe for a solo paddler is the Bic YakkAir One, but she doesn’t come cheap, at around £689.00. There are much less expensive inflatable kayaks. However, they lack the high specification and the durability of the YakkAir One, which has a patent system, giving rigidity and good tracking.


Data for the Bic YakkAir Light One

http://www.bicsportkayaks.com/products/yakkair,3,71/yakkair-one,775.html
Posted by William Serjeant at 12:12 am

Bill, I use a Sevylor "Tahiti" inflatable kayak to do my back-and-forthing. (My boat is 20 feet.) It is a very serviceable boat for a short ride, and I even paddled it more than a mile upstream on a little exploration with my 12 year old son. In a pinch, I have had it out with me and my two younger sons wedged into it. I am not an experienced kayaker, so I find I need the optional skeg to keep from going in circles. Setup takes 10-15 minutes total, though getting all the air out to stow it again takes longer. Therefore I often tow it after the first use, if I expect to need it again. You won't look dignified getting in and out, but you can't have everything. It can be had for about US$100, so when I foolishly left my original boat behind at the ramp after one trip, I went right out and ordered another. There is some peace of mind in not leaving a valuable tender for someone to steal when I take a walk into town.

Well, Jeff, Thanks for that info.. I'll look into it. The price is attractive and if it does the job, what more can I ask?