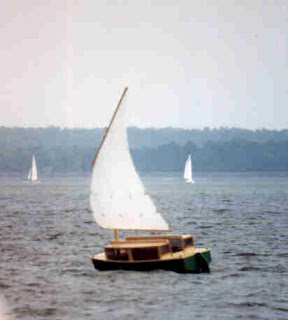 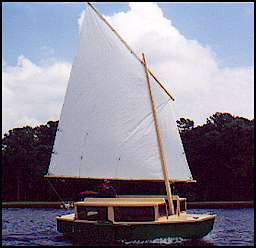 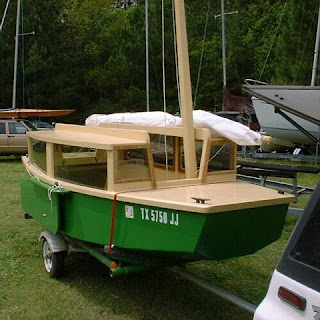 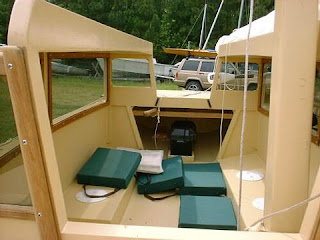 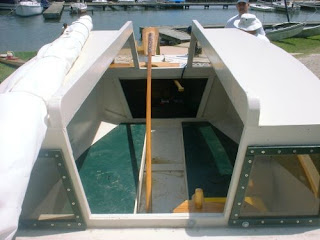 I have built a few small boats, and before starting any of them, I researched each design thoroughly to help me decide whether to go ahead. One boat I considered before building ‘Faith’, a Paradox sailboat designed by Matt Layden, was ‘IMB’, a 13’ 6” beach boat in the style of Phil Bolger’s Birdwatcher. IMB was designed by Jim Michalak as an entry in a competition sponsored by International Marine Publishing – hence the name IMB. He did not win the competition or benefit in any way - apart from the publicity - but a surprising number of people were interested in this unusual looking craft. Jerry Scott of Cleveland built a prototype, and the second one was built by Bob Williams.


Jim Michalak copied the idea of a walk-through, open-top cabin, from Phil Bolger, who first came up with the concept when he designed Birdwatcher. The advantage of this arrangement is that her crew can be free to walk the length of the cabin, which makes working at the bow or stern easy and secure. Setting and retrieving the anchor or operating the outboard motor can be done without her crew having to go on deck. IMB’s mast is off-set to the port side at the forward end of the cabin; it supports a standing lugsail with a long boom that overhangs the transom. Reefing is simply done by the use of sail ties for as many reefs as may be desired - possibly no more than two, because the leading edge of the sail would be severely reduced, thus impairing her performance to windward. Sailing her from within the cabin is similar to Paradox, but up to four people can be accommodated for day sailing aboard IMB, unlike Paradox, which becomes crowded with a crew of two! When IMB’s crew are seated on her floor, they have all-round vision through the tinted Plexiglass windows.


An advantage IMB has over Paradox is that she can be built in less time by using the stitch and tape method of joining hull panels. This system makes for a light boat, a cheap boat and possibly, under certain conditions, a faster boat than Paradox. I would prefer to be sailing Paradox in rough weather, because of her heavier displacement and her ability to recover from a full capsize. IMB will float on her side like Birdwatcher, but unlike the latter she has a light bottom, and because of this, she may not self-right as easily as Birdwatcher. IMB has a leeboard mounted on her starboard side. This is a sensible arrangement, because there is no need for a centreboard or an off-set board, both types impinging on the accommodation, and both require extra work in the construction of the boat. Furthermore, centreboards can become jammed by stones or mud lodging between them and the box in which they are housed; the boxes too, are subject to leaks, quite often where the board is supported on a spindle and sometimes through the open top of the box.