I relaxed and lay back, as my body was pleasantly warmed by the sun. Now and then I would survey the horizon through 360 degrees, and as I did again, I noticed there was a small moth following from astern, struggling to catch us up. I was reluctant to reduce speed, but at the same time, I wanted this speck of life to gain a foothold. The tiny creature eventually made it, and clung precariously to a seam near the peak of the sail. How relieved I was that this living marvel had not succumbed to a watery grave. He spread out his wings and rested - despite the oscillations of the sail. Later in the afternoon, when checking to see if my companion was still there, I noticed the sky had become dappled with tiny grey clouds, resembling the scaly pattern found on a freshly caught mackerel. The moth had gone, but what was the significance of the dappled sky?


With nothing better to do, I pondered the likelihood of the moth's survival, since the nearest land was at least twenty or thirty miles away. A margin of ten miles of uncertainty seemed quite a discrepancy, but I couldn't really be sure of ‘Phillida's’ exact position. Thirty-eight years later, things have changed enormously. I now possess a GPS which is hardly larger than my mobile phone, but it can give the yacht’s position within metres! Judging speed and distance was a bit hit or miss, because I did not have a trailing log. Apart from a primitive DF set, I was reliant upon a 'guess-estimate' of the distance travelled. By using my deviation-free compass and making allowances for variation, leeway and tidal set, I could have some idea of the track and distance over the ground made good. By plotting the position of the yacht on the chart every two hours, I could have a rough idea of where I was. Speed was the factor most difficult to assess, because it varied from hour to hour according the wind strength. If I wanted to be more accurate, I needed to make a note of the time in seconds it took the boat to pass a floating object, then apply a simple equation: 'Speed equals the length of the boat, divided by the time taken.' Knowing the speed of the boat I could ascertain more accurately the distance travelled.


As I was pondering these things, I noticed that ahead, there was something odd going on. I couldn’t make out what it was, but several gulls were taking an interest in a peculiar object. Could it be the rotting carcass of a seal or some other creature? A close inspection revealed a partially filled bathtub lodged among a mass of floating weed and splintered wood. Nearby there was a shiny red beer can which appeared to have been jettisoned just hours before, because there was not the least sign of growth on it.


Later that afternoon we passed two anonymous looking vessels; both were going astern in unison. This was a mystery. As far as I could see, neither vessel had equipment deployed for minesweeping, trawling or laying cables. I was glad to be clear of them. An hour later, at 1730, a westbound freighter crossed ahead. She was about a quarter of a mile away. The presence of these ships led me to believe we were in the west going shipping lane. Therefore I plotted a rough position at 50 degrees 8 minutes north, and 2 degrees 50 minutes west. To the north, and stretching as far as the eye could see, there was a golden haze, and silhouetted within it there was a ghost ship silently gliding towards the west, where her ethereal presence vanished as mysteriously as it had appeared. By her size and shape she could only have been the luxury cruise ship, the 'Oriana'. 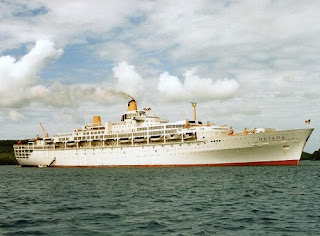 
Six miles to the west of Alderney there is a very powerful lighthouse marking the dangerous Casquettes rocks. This is a treacherous area because of the currents which can run at speeds of five knots or more. The range of the tide can be as much as nine metres! Before entering the area I needed to know my position more accurately, especially as there were shipping separation zones which had to be crossed. I hoped for good visibility so that I could identify light buoys. In theory I should have been able to see the loom of the Casquettes light when within ten miles of the lighthouse. Before nightfall I obtained a DF bearing so that I would have a rough idea of where to look. The DF gave a direction of 188 degrees true, but I was inexperienced at using the radio, and I couldn't wholeheartedly rely on the position line.


While there was daylight I took the opportunity of studying the Alderney chart. It was an old-style Admiralty version that showed soundings in fathoms and feet. I made a mental note that the island was roughly three-and-a-half nautical miles long, and a mile-and-a-quarter wide. It lay on an axis bearing southwest to northeast. My intended destination, the harbour of Braye, was at the northern end. Lights were shown on the chart in magenta; land contours, prominent buildings, roads and footpaths were all clearly marked in black, so that I had a pretty good idea of what to expect. There were several off-lying rocks, which meant that navigating around Alderney in poor visibility would be no picnic.

The wind filled in from astern, and it was quite a pleasant evening, which caused me to relax, but then I heard a thud as the bow struck something. ‘Phillida’ continued forward over the object as it scraped along her bottom. I anxiously examined the wake, but nothing could be seen. I assumed the object had been a bulk of timber, perhaps a large plank or a wooden crate. I carried out a thorough check of the hull, but I couldn't find any damage.


At 2108 I changed course to 130 degrees to counteract the ebb, then I tried starting the Primus, but it refused to light; instead, I used my back-up methylated spirit stove to boil three eggs. By the time I finished eating them, it was nightfall, and I found comfort in the silver moon, while the boat was shrouded in a thin layer of sea fog. It wasn’t long before I heard the sound of a ship's horn, which sent a chill down my spine. At that moment I wasn’t as brave as I thought I was. Furthermore, adding to my anxiety, I could not see any sign of the Casquettes light, so I took a DF bearing which showed it was to the south where is should have been. This settled my mind somewhat.


To be continued
Posted by William Serjeant at 11:26 pm