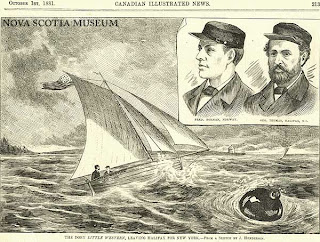 
How little was ‘Little Western’? She was a 16’ 7” lapstrake, double-ended dory that sailed from Gloucester, Massachusetts to Cowes, England. Her crew consisted of Frederick Norman, a professional sailor who had served aboard the American warship, ‘Trenton’, and his friend George P. Thomas of Halifax, Nova Scotia. Together they commissioned and bought their tiny cutter and shared the costs of provisioning her for the voyage.


She left Gloucester on 12th June, 1880, cheered by a crowd estimated to be in the region of 30,000. A week later the Cunard liner, ‘Gallia’ drew alongside, and spoke to her brave crew. All was well. They had made good progress, but a day later they encountered adverse winds causing them to lose 60 miles! That was a drift of 2.5 knots per hour – about their average speed through the water when sailing efficiently. Why hadn’t they deployed a sea anchor? Maybe they didn’t have one, or perhaps their calculations were well out? On 30th June, they were spoken to by the steamer, ‘Bulgaria’, but they refused the Captain’s offer to come aboard. On 26th July, they raised Land’s End, after a voyage of 2,500 nautical miles in just 46 days. Their tiny dory had sailed an average of 54.4 miles a day, which was very good indeed for boat with a waterline length of probably no more than 16’. They continued to Cowes, on the Isle of Wight, arriving there on 28th July.


Having sojourned in England for nearly a year while touring and exhibiting their boat, the intrepid sailors stoically set sail from London on 15th June, 1881, to attempt a return voyage to Gloucester. After a very arduous and wet passage taking 62 days they arrived back in Halifax, having beaten the Andrews brothers’ record for sailing the smallest boat across the Atlantic. Not only did they break the smallest boat record, but on the outward passage from Gloucester, they knocked 3 days off the time the Andrews took to sail from west to east. To understand the difficulty of the return passage you need to note that their average speed had only been 1.6 knots, almost half of that on the outward leg. They finally returned to Gloucester on 16th September, 1881. They had become the first to sail both ways across the Atlantic in a boat under 20’.

The Nova Scotia Museum of Cultural History has a lithograph dated 1st October, 1881, depicting the ‘Little Western’ leaving Halifax Harbour bound for New York. (Date of departure, not stated.) The portraits of the two men are inset in the top-right corner of the illustration. Fred Norman is on the left, and George Thomas is on the right. Norman is described as from Norway, and Thomas as coming from Halifax. (Elsewhere, I have read that both men were British.) You’ll note that ‘Little Western’ was registered at New York. She had a bowsprit and a generous sail area with a high-peaked gaff mainsail. The sail panels were cut vertically, and she flew the Stars and Stripes at the peak. The boat had an almost upright stem and stern post. Take note of her high topsides which would have provided plenty of buoyancy, in addition to giving her the capacity for carrying ample drinking water in wooden casks, provisions and additional ballast (if necessary to keep her stable) for her long voyage.

Fred Norman was my Great-Grandfather. I had just found out about his famous voyages last year, and told my dad (who is is also now VERY interested about this). My dad is 94. We have found several articles that do verify Fred as being from Norway, and even his mother's name. Is there ANY chance that the final location of the dory Little Western is known?

Justmine,
My Great Grandfather was George Thomas. The Little Western was placed on display in a museum in NYC and was destroyed when the museum burned up in the late 1800's.
//s// mt72425@gmail.com