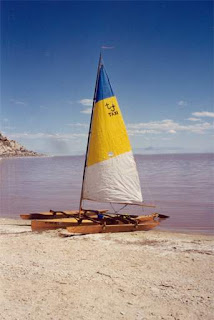 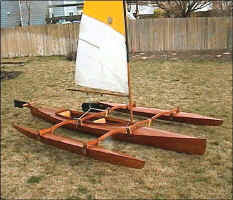 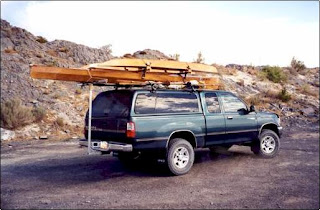 Kellan's on his car 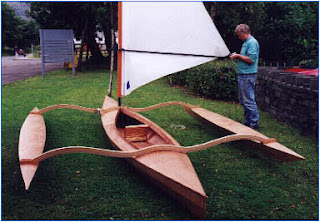 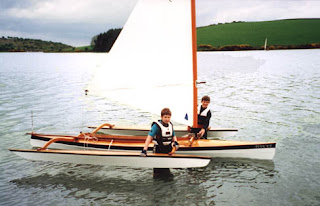 
An Internet friend, Kellan Hatch, wrote an article* for Duckworks Magazine featuring the building and sailing trials of his 16’ 6”, kit-supplied CLC Mill Creek 6.5 Trimaran. The title of his article was, ‘A Curious Boat for Questionable Adventures’. Kellan’s presentation was both entertaining and honestly informative. I’m sure his findings and insights will be useful to anyone contemplating undertaking a similar project. For him, the boat had to meet certain requirements. She had to be easy to build, be capable of being transported on the top of his car, be suitable for use on shallow water, and large enough for his whole family, i.e., he, his wife and their two small boys.


Chesapeake Light Craft have been very successful in marketing a wide range of kits and plans for the home boat builder. One of their early models caught my attention, the very same CLC Mill Creek 16.5 chosen by Kellan, but I was put off from obtaining the plans, because getting alongside a pontoon and disembarking from her would not be a simple matter for me alone. My local river is the River Crouch where access to the water is somewhat limited. My nearest slipway has a very narrow ramp, hemmed in by walls either side, which make it unsuitable for launching or recovering wide vessels. Kellan’s Mill Creek trimaran is more fitted to being launched and recovered from a gently shelving beach, and there are none that I know of with overland access along the banks of the River Crouch.


Despite her drawbacks for me, the CLC Mill Creek 16.5 has several attractive and sensible features. I especially like, her speed, and when she is not being used as a trimaran she can revert to being an ordinary two man kayak. I also like her stability when rigged as a trimaran. Kellan changed the method of joining the crossbeams to the hull and floats to prevent unfair loading at stress points. He did this by adopting James Wharram’s method of lashing the various parts together. Later he observed that Chesapeake Light Craft had modified their design in like fashion, but with a better arrangement that avoided water drag.

I would imagine Kellan had some hassle when loading the boat on his car. His photos show that he added a support beam at the rear of his car, presumably to make it easier for putting the boat on and off the roof rack. All things considered, he found the Mill Creek 16.5 suited him and his family for use on the Great Salt Lake. Any UK aspirants could look at the web site of Fyne Boats (see link below) who produce a kit for the Mill Creek 6.5. I’m not sure if they do the crossbeams and floats, but they sell the plans to make them. If I were to choose between Derek Munnion’s ‘Sharpy’, featured in yesterday’s Blog and the Mill Creek trimaran, I would opt for Derek’s monohull, because she would suit my situation better. I’m convinced she would take less time to set up for sailing, and disembarking or getting aboard at a pontoon would be far easier, on the other hand she would be slower.