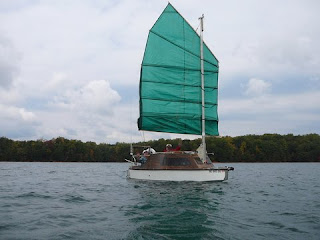 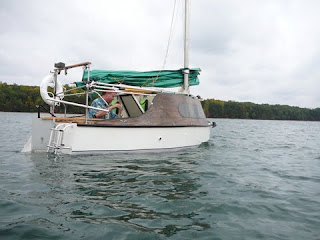 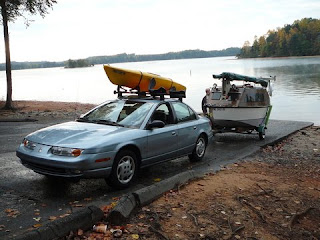 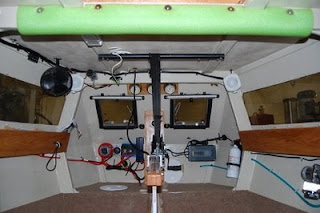 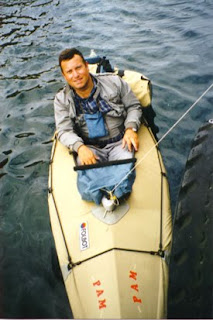 I guess quite a few of you will have read William H. Longyard’s, ‘A Speck on the Sea’, which is a well-researched compilation of epic voyages in improbable vessels by extraordinary men and a few equally extraordinary women. I have a complimentary copy of the book signed by William himself, with the caption, ‘To Bill Serjeant, who understands the beauty of small boats and the spirituality of the seas. William H. Longyard. January 4, 2005’. Well, that book has been an inspiration to me and I have used snippets from it to aid me with my articles here on my Blog. He doesn’t mention his own ‘voyages’ through parts of Europe in a single Folbot Aleut kayak, named ‘Pam’, after his wife, and a double Folbot Greenland 11, ‘The Mango Queen’. His web site http://pw1.netcom.com/~longyard/KayakinginEurope.html outlines his experiences in locations such as the Grand Canal of Venice, the Mediterranean coast at Nice, kayak camping on the banks of the Danube and Kayaking on Lake Como. He offers a video, ‘Kayaking in Europe’, with everything you need to know to follow in his wake. All this information is on a CD for $20.00, plus $3.20 for priority shipping. To purchase the CD contact William here: longyard@ix.netcome.com .


Within the pages of ‘A Speck on the Sea’, William does not mention that he spent 10 years designing and redesigning a small sailing boat for his own use. The result, after seventeen months building her, was a unique and amazing 14’ by 6’ junk-rigged trailer sailer he named, ‘Lucky Town 7’. He overturns convention by incorporating features you would never expect to find on such a small cruising sailboat. Yes, he does use a Hasler-type junk sail made from Polytarp, but it is rigged on an aluminium mast that can be lowered or raised in a matter of seconds. This he achieves by incorporating a spring-loaded mechanism into the base of the mast to act as a counterbalance when it is supported in a tabernacle to his own design. Another of his innovations is a plastic collar that goes around the mast with a stainless steel bolt attached to it for pivoting the boom (lower batten) so that the mast can be lowered without the sail bundle getting in the way. ‘Lucky Town 7’ is equipped with a 55 lbs thrust trolling motor powered by two Optima Deep Cycle marine Group 24 batteries. They are charged by a 100 amp marine alternator driven by a 4 HP diesel engine located in the lazarette.


This amazing micro-cruiser has sitting headroom, and within her cosy cabin there’s ample space for a six foot person to sleep on a self-inflating mattress that can be rolled away when not in use. In fact there’s enough space for two compatible crewmates to sleep on the cabin floor. Incredibly, this unique craft has a flush toilet and a holding tank! I understand that she may even have a shower! Besides all this, the rig can be handled from inside the cabin, and the same can be said for the 246 lb drop keel. Likewise, the aluminium kick-up rudder can be raised or lowered by the crew from inside the boat. I believe plans are in the pipeline for amateur builders at a nominal rate. You may not be attracted by the boat’s appearance, but don’t let that fool you. It’s obvious a lot of thought and effort has gone into the project, resulting in a design that meets the requirements of those individuals who enjoy their own company and who cannot find a production craft for creek crawling, inland waterway exploration, or coastal cruising during settle weather.


A good article by Thomas Armstrong, with the same illustrations I’ve came across elsewhere.


Book Review, ‘A Speck on the Sea’, by Brian Anderson – not all of it complimentary

Hi, have just ordered your Lucky 7 boat plans from Duckwork magazine and trying to imagine if the boat hull is comprised of an existing hull of another boat or fabricated from scratch. The cabin reminds me of a truck canopy too. Plus, can it actually be floatable in 10 days? Thanks, Pete

Hi PBK, Lucky Town 7 is a complete homebuilt boat. If I were you, I would stick closely to the plan. It took William 10 yrs to work it out. There's a lot of fun to be had building a boat like this. She's versatile, cheap to maintain and you can take her most places.
Cheers,
Bill.

I need Mr Longyard email address so i can ask him about how to loft the side of the hull of the boat that all.

Sorry Alex246, I do not have Mr Longywrd's email address. I hope you'll be able to work out how to do the lofting..
Cheers,
Bill.