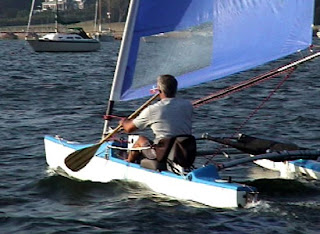 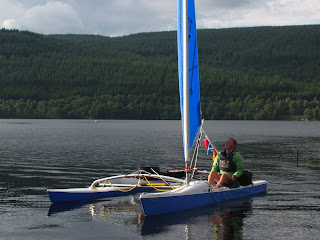 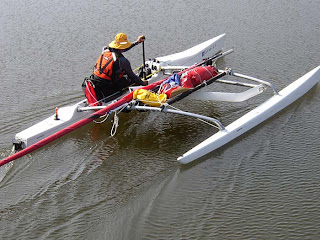 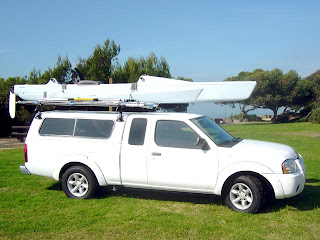 Fits OK on this big car 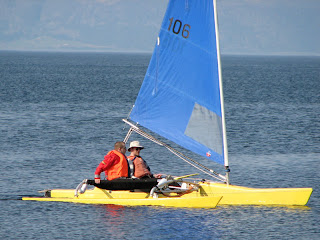 For Sale in Norway 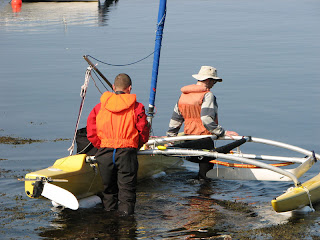 'For Sale' being launched


Hydrovisions market two versions of the Raptor 16 outrigger sit-on-top canoe: the Competition model and the Expedition model. As the name of the boat suggests, these unique craft are approximately 16’ in length. They are described by Hydrovisions as being lightweight, high-performance sailing outriggers that can easily be transported on the top of a car. Either with or without her roller-furling sail, the Raptor 16 can be propelled with a single-bladed paddle. Unusually, for this type of craft, she has a specially designed foiling system named the ‘Dualift Foil’ which helps the helmsman keep his boat on an even keel - except she doesn’t have a keel! Exactly the opposite, because the reason for the foil is to reduce weight, and hence increase the speed of the vessel. Raptor 16 relies on a dagger-board to counteract leeway. To achieve her optimum speed, she uses her Bruce-type foil to lift her float clear of the water. This reduces water drag, while adding to the stability of the craft. Her very narrow hull causes little resistance to forward motion. Her outrigger hull is mounted on her starboard side, and when she is on the starboard tack in winds above Force 2, the helmsman should adjust the foil to keep the float hovering over the surface of the water. While on the starboard tack, when the wind is less than a Force 2, the foil does not need to be deployed, because the float alone is sufficient to prevent the boat from heeling to leeward - use of the foil would only increase drag and reduce speed. When the Raptor 16 is on the port tack, her helmsman need only deploy the foil if the wind is above Force 2, when it will help lift the float to reduce drag and prevent a capsize. According to the manufacturer, most novices can learn how to use the foil in less than 30 minutes, and after an hour of practice the process becomes intuitive


The primary use of the Competition model is for racing, but the racing rules for the Raptor 16 Class include the use of a single-blade paddle when the crew believes it will be advantageous. The boat can be raced in paddling events without her sail. It was envisaged that the Competition model would also be suitable for those who just want a lightweight, but fast boat for messing about, beach sailing and surfing. The Expedition model has additional features such as more storage compartments in the main hull and float, a roller furling mast step that allows the sail to be rolled up when not in use, plus extra blocks, cleats and fairleads for deep reefing of the sail. It also has the Raptor Sidecar that fits on the support beams for carrying camping gear etc.. There’s a choice of sail area, either 70 or 90 square feet. I like the fact that her main hull can be brought alongside a pontoon, jetty or quay, which makes getting ashore easy, and visa versa. Launching and retrieving her is not too much of a problem, especially if there are two of you, but her 16’ 9” composite hull only weighs 40 lbs which makes it possible for the solo sailor to do it when the conditions are right, e.g., a gently shelving sandy beach and the surf is not running too high.


I’m pretty impressed with the Raptor 16 models, but I have reservations regarding exposure to the elements for her crew. On a fine sunny day in warm climes this does not present a problem, but for the expedition sailor who may have to be out in inclement weather, he would need to be protected by wearing the very best watertight thermo- efficient clothing. Mitigating this to a certain extent, the Expedition model does have the addition of a Neoprene skirt that can be fitted to help protect her one man crew. My biggest reservation is the potential for capsizing, because, unlike the Mill Creek 16.5, WindRider 16, and the Hobie Island Adventure Trimaran, this outrigger canoe requires the skill of her crew to prevent her from turning turtle when the going gets tough. The float alone does not provide sufficient buoyancy to prevent capsizing when on the port tack, or enough weight to keep the boat stable when on the starboard tack. I acknowledge that her crew can furl away her sail, even stow the rig on a special fitting on the support beams, but that just leaves paddling as the crew’s means of propulsion.


Here’s a quote from the Hydrovisions’ Faq page;


“Tacking from port to starboard tack in strong winds is the only evolution that is a bit tricky and requires a careful coordination of foil position, foot pedal steering, and mainsheet control.
When the boat fills away on the starboard tack, the helmsman must bear off a bit and ease the main sheet until the boat attains enough speed through the water (about two knots) for the foil to take effect and keep the ama from lifting and causing the boat to capsize. After this evolution has been practiced eight to 10 times in strong winds, it too becomes more or less instinctive,” and, “Without the foil, the Raptor would capsize when sailed on the starboard tack in all but the lightest wind conditions. When sailed on the port tack without the foil, the ama would be forced low in the water, increasing surface drag and slowing the boat considerably.”


In the US a Raptor 16 Competition will set you back $4,700 and the Expedition model will require $4,995. There’s a second-hand one in Norway at http://homepages.rya-online.net/ocsguk/ocsg_for_sale_and_wanted.htm for £2,500.


Chakpak Video of an Expedition Model

Hi, I am looking for a raptor 16. I live in the states. If u know of anyone interested in selling please contact me. Thanks MG

I have had mine in Minnesota for 5 years or so. I have recently purchased a Windrider Rave. My Raptor is available if you are still looking.

I am looking for a hydrovisions raptor expedition. I live in Maryland.