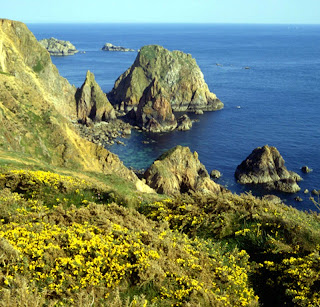 
Time slipped by, and before I knew it, four hours of my life had been lost while I played the part of a somnambulant ship’s pilot who was suddenly woken from a trance by the glare of a powerful searchlight. A large tanker slowly emerged from the swirling fog, and as she lumbered by, a powerful beam of light shone from her bow until another from her stern reassuringly took its place. How I praised the crew's vigilance. Undoubtedly they had spotted us on their radar before cautiously proceeding. With hindsight, I supposed we were at the eastern end of the east-going shipping lane, which lay to the north of Alderney.

The early morning light revealed an agitated sea. As the wind increased, I felt it prudent to double-reef the mainsail and set the small jib. Visibility was poor. At 0800 I took a DF bearing of the Alderney aero beacon which gave a position line of 230 degrees. I was tired and puzzled by the bearing. Had I been able to think clearly I would have changed course for Bray harbour to the southwest. In the event, I continued on a south-easterly heading.

At 0912 things looked a little rosier, as a watery sun made its appearance, and I was inspired to shake out the reefs. Half-an-hour later the sun was so warm I removed my shirt and sunbathed, but the haze prevented any sighting of land. As very little was happening, I took the opportunity to bail out water that had found its way into the bilge. A jaunty French crabbing vessel briefly came into view, and as we passed each other, the Breton skipper politely doffed his cap to the mad dog of an Englishman. I continued on the same course, and when it was time for coffee at 1100, I was surprised by the appearance of a headland that emerged from the haze. At that moment I ceased keeping a written log, which only meant one thing - events became so demanding that I did not have a chance to record them. I was also very tired and anxious.

Was the unidentified headland the north-eastern end of Alderney? Most definitely not! It had a lighthouse, but it did not bear a resemblance to the description given in Reeds Nautical Almanac. Neither did compass bearings confirm that the promontory was that headland. On the other hand the characteristics seemed to match those of Grosnez Point, on the north-western tip of Jersey - but that was impossible! There was no way my course keeping could have been that bad!
I desperately needed sleep, and of necessity I sailed close to the headland to find a spot where I could anchor. I used my large fisherman anchor. It was attached to a short chain on the end of a very long length of tarred hemp, but to my consternation the current was so strong that the bow was dragged dangerously low in the water. Since I could not retrieve the anchor because of the force of the current, there was only one thing to do; that was to cut it loose! With a twang, the warp parted. Fortunately there was enough wind for the boat to sail between the rocks at the foot of the cliff.

As I examined the lighthouse I noticed there were several excited people running along the cliff’s edge while waving their arms. They were apparently interested in my antics, and more than that, they were obviously concerned for my welfare. Perhaps they were amazed at the foolishness of the stupid Englishman? They must have guessed I was English, because ‘Phillida’ flew the red ensign at her stern.

Half-an-hour elapsed while ‘Phillida’ stemmed the tide, then a large camouflaged motor vessel took up a station to leeward. Using my elementary schoolboy French, I managed to persuade those aboard that I did not need assistance and that all was well. When scanning the horizon to the west for more clues as to where I was, I observed the unmistakable outline of Alderney. The island was silhouetted against the setting sun. Then, and only then, did it dawn on me that I was at Cap de la Hague! How stupefied I had been, not to have deduced where I was.

Fatigue had incapacitated me, but my guardian angel must have cared, because there was enough wind for us to reach the safety of Braye and be anchored in the harbour by midnight. I was taken by the romance of the setting, as the craggy outline of cliffs and buildings came into view. The whole panorama was bathed in moonlight under a star-studded sky, animated by windblown silver clouds marching in formation to the west.


I let go one of the two remaining anchors, and after rapidly arranging the boom tent, I fell into a deep slumber.


To be continued
Posted by William Serjeant at 8:41 pm

Great story. Fatigue can make us dangerously confused.Had you been without sleep for the whole passage? And how long did the crossing take?
Looking forward to the next installment.
Ben.

I left my mooring on the River Exe at 0600, 4th July, and arrived in Braye Harbour at midnight on 5th July, which amounted to a total of 42 hours, but I managed to have about 4 hours of semi-sleep during the night of the 4th. I also rested whenever I could. Poor visibility was the main problem. I was young and inexperienced, but the learning curve was rapid!
Bill.

Thanks for that info, Bill.

The longest I've been out is 22 hours and I'm wondering how far I can push the boundaries and extend my cruising.

The trouble is I'm middle-aged and inexperienced, a slow learner to boot, and the seas are ever more crowded.

I don't like doing more than 15 hours when solo coastal cruising. At 3.5 knots a distance of 53 miles can be achieved. The longest distance I have to cover when cruising the South Coast is 60nautical miles, i.e. Dover to Brighton which takes about 18 or 19 hours; that's as much as I can do without becoming too fatigued.
Bill.

I make calculations based on a 3 knot average and plan not to spend more than 24 hours between A and B.

That gives me a theoretical range of 72 miles, though the most I've done is 68 in 19 hours. Similar to your Dover to Brighton run.

I smiled in recognition when I read of the motion being so bad you had trouble staying on your mattress. A small boat really isn't the best place for a good rest.

I've really enjoyed reading your Cruise to Alderney. Thanks for sharing Bill.